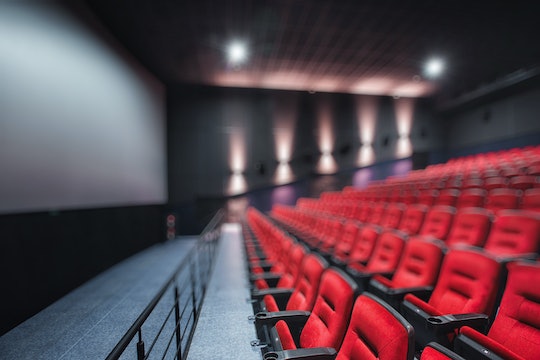 If You're Taking A Newborn To The Movies, Experts Say You'll Want Ear Protection

Part of being a new parent means asking a million questions you have likely never considered before. Do spit-up stains come out in the wash? Why are my nipples so sore? When can I take my baby out? Are movie theaters too loud for newborns? No question is too out there, too far-reaching, or too awkward, and you're likely to ask them all in the first few weeks after bringing your baby home.

That last question might seem odd if you haven't yet been in the throes of the newborn stage and desperately searching for a way to get out of the house and feel some semblance of normalcy, but trust me — your child's safety is most definitely something to consider if you're planning to take a newborn anywhere. Going to the movies might seem like a safe bet for a first outing because your baby will likely just eat and sleep through the whole thing, but because their delicate little ears can be quite sensitive, it is important to consider whether or not movie theaters are too loud for newborns.

"Any exposure to loud sounds, especially above 70 to 80 dB level, puts an infant’s ears at risk and places these vulnerable patients in jeopardy for permanent damage to hearing," Brian Reilly, M.D., co-director of the Cochlear Implant Program at Children’s National Hospital tells Romper. Reilly puts it bluntly for parents — "Movie theaters are too loud."

A typical movie's sound will play below the threshold of 85 decibels, the National Association of Theaters told NBC news in a 2016 report, but there are a few exceptions. The same report concluded that the kids' movie Storks logged an average decibel level below 85, but spiked to 99.3 decibels during one scene, while the movie Deepwater Horizon hit 101 and 104.9 decibels during several scenes featuring large explosions.

Because the sound in a movie theater is decidedly loud, what are the risks to an infant? Or, for that matter, anyone's ears? Although an infant's ears are delicate, Laurie Hanin, Ph.D., CCC-A and Executive Director at the Center for Hearing and Communication in New York City explains that hearing damage from sound above a certain decibel level is cumulative over time.

"The decibel levels of sound that are too loud for older children and adults are the same for newborns, and the levels that are damaging are related to the amount of time spent listening to those levels," Hanin tells Romper. "It has long been established that the level of 85 dB for a period of eight hours can be damaging to hearing, over time. The louder the noise level, the shorter the time is considered hazardous. NIOSH (The National Institute for Occupational Safety and Health) stipulates that for every 3 dB increase in noise, the 'safe' level is decreased by half."

Hanin explains how this cumulative effect means that protecting a newborn's ears is vital. "Whether or not damage can occur to hearing to either a newborn or an individual of any age depends on how loud the sound is. When a sound is very loud (130 dB or higher), hearing loss can occur from a one-time exposure, and this is typically known as acoustic trauma. Sounds such as those from firecrackers, guns, and explosions can be this loud," she says. "If a newborn, or an individual of any age is exposed to a 90 dB sound level such as at movies, on a one-time basis, there shouldn’t be any immediate damage. However, if the baby was exposed to 90 dB for two hours (the length of a typical movie) on a very regular basis, it is possible that over a number of years, a hearing loss could develop. Damage due to loud noise is cumulative, and if a baby continues to be exposed to hazardous levels of noise in numerous environments, the likelihood of hearing loss later on increases."

When you're considering taking a newborn to the movie theaters, it is important to note that you can take measures to ensure their protection if you're concerned about the damage that may accumulate over their lifetime beginning at such a young age. But both Reilly and Hanin agree that keeping your infant at home is probably the safest bet. "All babies who 'go to the movies' and accompany their parents should wear hearing protection," Reilly says, including that parents should not use small ear plugs as they could be accidentally swallowed or aspirated by infants. "It’s best for parents to probably leave the baby at home and get a baby sitter or family member to attend to their infant during a night out to the movies."

Laurie Hanin, Ph.D., CCC-A, Executive Director at the Center for Hearing and Communication