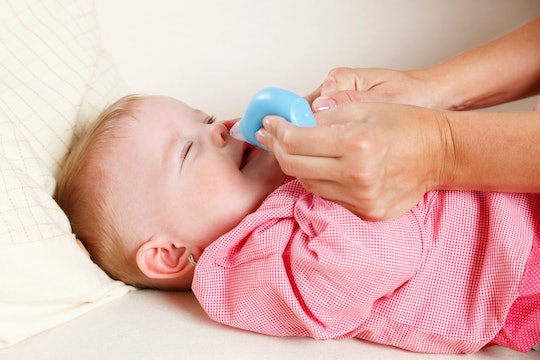 Are Snot Sucking Tools Dangerous For Babies? Here's What You Should Know

Trying to comfort a baby with a stuffed-up nose is one of the most frustrating things a new parent can face. Naturally, an infant who can't breathe well can't eat or sleep (which means you can't sleep either), but it's not like you can give them an over-the-counter decongestant or a box of tissues. The only options available — besides sucking the gunk out directly with your mouth — are rubber bulb aspirators or straw-like nose aspirators (a more hygienic take on the mouth-to-nostril method). But are baby nostril suckers dangerous?

Considering that virtually every baby born in a hospital gets sent home with one of those blue rubber bulb syringes, they've got to be pretty safe... right? In a word, yes — but there's still a proper way to use them, and failing to follow protocol could cause problems. Stuffed with gunk or not, those tiny noses are still, well, tiny, and they need to be treated gently. Getting too aggressive can result in nosebleeds and swelling, neither of which will make your baby feel much better.

There is also a step you can take before you pull your baby's snot out to help move it along. "It’s best to use saline before suctioning to loosen the mucus," Dr. Tanya Altmann tells Romper.

"Suctioning a dry nose or too forceful of suction can irritate or injure the delicate skin inside the nose. Suctioning too much can also sometimes cause further swelling and irritation and make it seem like baby is more congested. Try not to suction more than a few times a day. Nasal saline on its own is fine."

When it's time for a snot sucking session, put your baby down on his or her back and squirt two to three drops of saline solution into each nostril. Then, after squeezing the bulb to get all the air out, very carefully insert the tip of the aspirator into your baby's nostril and release the pressure (be sure not to go too far up into the nostril!). With any luck, a loud (and gross) sound will follow and a stream of mucus will be pulled into the bulb. (Also be sure to squeeze that mucus out into a tissue before repeating the process on the other side.) Again, be very, very careful about how far you put the aspirator into your baby's nostril. Baby nosebleeds are scary stuff!

Assuming you're using the nasal aspirator in the correct manner, the only other thing you have to worry about is cleaning it after every use. Livestrong recommends the following process: Submerge your aspirator in a bowl or sink filled with hot water and antibacterial soap, then squeeze the air out and allow it to suck up the water. Squeeze the bulb again and let it dry.

Unfortunately, there's apparently no method of sterilization that guarantees your bulb syringe won't end up a toxin-infested mess on the inside, if one mom's recent viral photos of a moldy cut-open aspirator are any indication, so keep that in mind when you're giving it a wash and not propping it in a position where it can drain.

You could also try purchasing a model that screws open and shut (though some parents complain that they don't suction as effectively). Or you could replace your aspirator whenever your baby gets a cold, considering they're relatively cheap.

Or maybe, after all of that, you're turned off completely to the bulb syringe idea. Perhaps the Fridababy NoseFrida is more your style. This booger removing device doesn't go up into your baby's nose at all (instead, it's placed against your baby's nostril, which creates a seal), so there's less chance of irritating the nasal passages. It's also easier to clean than the potentially mold-growing bulb, as the filters used are disposable and the device itself is dishwasher safe. Still, experts warn against engaging in any method of suctioning your baby's nose too frequently. Nationwide Childrens' Health Systems recommends no more than two or three times a day (no matter how tempting it is to do more).

Basically, whichever way you choose to de-stuff your baby's nose, be cautious and clean — and everything should be fine. Remember, cold and flu season might feel like it's never going to end, but the day will dawn when your baby can once again breathe through her nose... and you can throw that dang bulb in the trash, or at least store it away until the next outbreak.

More Like This
Is It Good For Babies To Be Exposed To Germs? It’s Complicated
When It’s Safe To Bring Your Newborn To A Restaurant, According To A Pediatrician
Can You Burp A Baby Too Hard? A Pediatrician Shares Tips For Gassy Tummies
The Best Toys For 3-Month-Olds