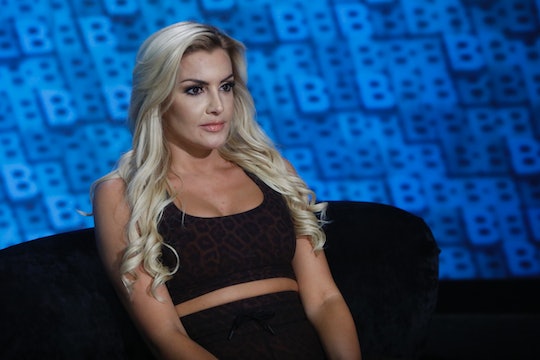 Nick & Kat Are The Surprise Showmance Of 'Big Brother 21'

I can't imagine what it's like to be stuck in one house with a group of people for months and then move to a jury house with a little less supervision and surveillance. But every season, that small taste of freedom affects the Big Brother jury members differently. This time around, it made Kat and Nick go from enemies to frenemies and now, something more (maybe). After the first big jury segment of the season, fans are wondering if Nick and Kat are dating. The Big Brother contestants definitely got closer in the jury house, but it’s not clear yet if they are official.

They could just be finding physical comfort in each other’s arms with no one else to target since they are still sequestered. And the absence of 24/7 cameras probably makes it a little easier for canoodling in the middle of the night. In the recent jury segment on Big Brother, it looked like Kat and Nick had been hooking up and although there isn't a definite confirmation of this just yet, it could mean the downfall of Nick and Bella.

And if that’s the case, will he move on to Kat? Luckily, fans won't have to wait long to find out, since the Big Brother 21 finale airs Wednesday night.

Because of their history of butting heads in the Big Brother house, Kat and Nick don't seem like a couple who would try to make it work outside of the show. They don't have a long drawn out history like Holly and Michie and they haven’t really worked together one on one. I can't see them dating once Big Brother is over for the season, but that doesn't mean their jury house showmance won't be a major talking point in the live finale special.

Nick went into the jury house still technically attached to Bella, who was evicted back in week four. If he and Kat hooked up even once or did anything close to it, he will have to answer for it live on-stage. Still, I don't think it means Nick and Kat will be together. If they did get closer in the jury house, it was likely due to their circumstances. They were no longer being watched by constant cameras and they didn't have anyone else to get close to physically. For them, it might have made sense to put their differences aside for the time being.

Kat and Nick also live in totally different regions of the US. Kat lives in Texas right now, whereas Nick lives in New Jersey. It’s not uncommon for Big Brother houseguests to make the trek from their hometowns to Los Angeles as they ride their 15 minutes of fame, however, so if Kat and Nick find themselves on the West Coast eventually, they could meet back up.

They never really had a definitive showmance, though, so I can't see either of them picking up and moving to be closer to the other after Big Brother 21 ends. They might have found comfort in each other in the jury house, but Kat and Nick probably won't be dating anytime soon. And before Nick dates anyone after Big Brother, he’s going to need to answer to Bella for potentially cheating on her. I just don't see his first post-Big Brother relationship being with Kat.

Nick and Kat will likely delve deeper into their newfound *friendship* on the finale Wednesday night, but I don’t think whatever they have going on will extend beyond the walls of the jury house.