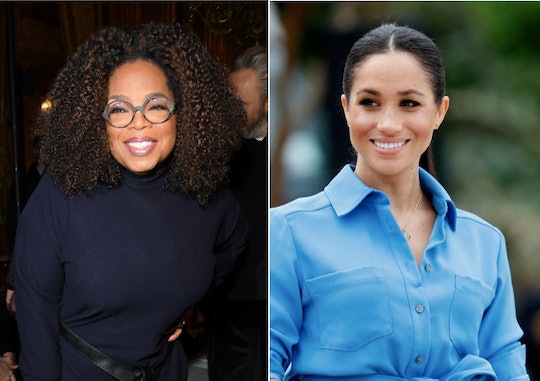 Do you know who you want in your corner if you're having a rough time? Oprah Winfrey. Actually I think you should just always want Oprah Winfrey in your corner no matter what is going on in your life. Because while she might be famous for simply being Oprah, multimedia queen, she is also well known for being a very loyal and excellent friend. And do you know who could use a little backup these days? Meghan Markle, unfortunately, she needs a little protection these days. Now if you're wondering if Oprah Winfrey and Meghan Markle are friends, I can happily tell you that indeed they are. And what's more, Winfrey is speaking out about her lovely friend because she's had enough of the rude and untrue gossip.

As we all remember, Oprah Winfrey was one of the many celebrities in attendance at the royal wedding of Meghan Markle and Prince Harry last May. Now considering the fact that it was the social event of the year, it probably didn't come as a big surprise that Winfrey was in attendance. But she wasn't simply there as a celebrity; it turns out she had been invited in her capacity as a friend of the bride.

Winfrey was interviewed on CBS This Morning by her best friend Gayle King (who was in attendance at Markle's baby shower hosted by Serena Williams in February, according to Harper's Bazaar) about her upcoming partnership with Prince Harry on a mental health docuseries. Mental health awareness has been a key issue for both Winfrey and Prince Harry in the past, but that's not the only thing they have in common. They are both protective of Meghan Markle.

When Winfrey was asked how she felt Markle was portrayed in the media, she didn't hold back. According to s Page Six, she replied: "I think she’s being portrayed unfairly. And I feel that, if people really knew her, they would know that she is not only everything that we perceive of her as being graceful and dynamic in holding that position. But she just has a wonderful, warm, giving, loving heart."

Since marrying Prince Harry, Markle has been frequently criticized for all manner of imagined issues and even had to suffer through her father attacking her in the press. Fortunately, Winfrey and King both added that Markle doesn't "buy into it," which will hopefully serve the Duchess of Sussex well once her baby arrives in the coming weeks and she will most likely be scrutinized not just as a woman but also as a mother.

Winfrey herself knows exactly how difficult it can be to live in the public eye, which is why it's so lovely that she is standing up for the Duchess of Sussex. In the past, Winfrey has reportedly even gone so far as to have Markle's mom Doria Ragland over to her house, according to The Sun, perhaps to help her through this life change of having an enormously famous daughter all of the sudden.

As I said, if you're going to have anyone in your corner... let it be Oprah.