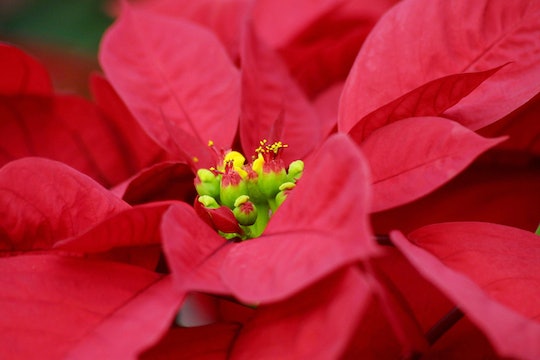 Are Poinsettias Safe For Kids? Here's An Update On This Classic Holiday Question

Every holiday season, festive poinsettias start popping up everywhere. Over time, they've become as synonymous with the season as snowflakes. Sadly, though, many mamas admire these pretty plants from afar out of fear — which begs the question, are poinsettias safe for kids? It's high-time to get to the bottom of this classic Christmas plant conundrum, given the fact that the poinsettia's reputation as a toxic plant precedes it these days. And, really, that's just a shame. If these guys aren't as potentially dangerous as they're made out to be, people should know, right?

First, let's start with the basics. According to the American Phytopathological Society, the poinsettia — or the Euphorbia pulcherrima Willd — is native to Mexico. The tiny yellow centers are flowers, while the showy red portion of the plant many people refer to as the flower is actually just modified leaves or bracts. It's also worth noting that these don't just come in red but also pink, white, or bicolored. It was the brilliant red color of poinsettias that earned it reverence among the ancient Aztecs of central Mexico, though, explains APS. The Aztec people referred to it as "Cuetlaxochitl" and considered it a symbol of purity. They also cultivated the plant to create dye from its leaves and medicine from its latex.

Poinsettias came to America by way of one Joel Roberts Poinsett, an American physician and diplomat who served as the first United States Minister to Mexico. He also happened to be an amateur botanist who collected horticultural artifacts from all over the world, according to the city of Sumter's official site. In 1826, during one of his trips to Mexico, he fell in love with the distinctive red plant and had several sent back to his home in Greenville, South Carolina. Eventually, it would be named the "Poinsettia" in his honor.

Which brings us to the question at hand: are poinsettias safe for kids? In a word, yes. The idea that poinsettias are "deadly poisonous" to children and pets was even debunked by the famed online fact-checking site Snopes, citing several experts as proof. The site noted that a 50 lb. child would have to scarf down roughly 500 to 600 poinsettia leaves to exceed the experimental (read: dangerous) doses,. The National Poison Control Center — the standard when it comes to questions about children and issues of toxicity — confirms the poinsettia's bad rap is largely bogus, saying on their website, "poinsettias are mildly irritating to the stomach if eaten in quantity, but they are not potentially deadly. Dispel that much-touted Christmas myth."