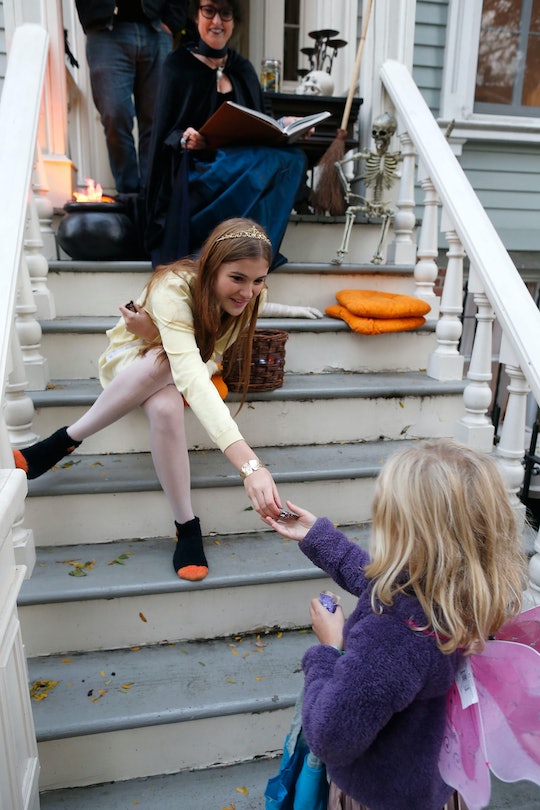 Are Razor Blades In Halloween Candy A Real Thing? Debunking The Myth

Now that I'm an old-ish lady with biggish kids, I really want to take Halloween to a new level. I want to carve intricate Jack-O-Lanterns and play spooky music and even maybe get one of those sweet fake-smoke machines to make my house look all spooky and such. I also really, desperately want to hand out homemade caramel apples to the, like, 12 kids I will get trick-or-treating, but I'm worried their parents won't let them eat them on account of the whole razor blades in Halloween candy thing. I already wear my pyjamas outside far more often than is considered socially acceptable; I don't want to get pegged as the "weird Halloween lady" too.

But has the whole razor-blade-in-Halloween-candy thing ever actually been a viable threat to the safety of our trick-or-treaters? Certainly, my own parents and friends' parents warned us of the dangers of homemade Halloween candy every year, telling us not to those cookies or candy apples because they were very likely filled with broken glass or razor blades. We had a neighbor-lady who gave us homemade popcorn balls every year, and every year we had to throw them in the garbage. It seemed ridiculous, of course, but where did the fear of Halloween candy being tampered with come from?

The Myth Of The Halloween Sadist

It turns out the whole concept that there is some crazy person out there who wants to hurt kids on Halloween is based on a myth. According to UrbanLegends.com, the contemporary myth sprouted by word-of-mouth in the '70s. In fact, one of the only "real" cases of an adult tampering with a child's Halloween candy that resulted in the child's death happened in 1974. A man named Ronald O'Bryen took a life insurance policy out on his son, Timothy. He then laced his candy with cyanide to collect on the insurance money. He was later charged and convicted with murdering his son.

Unfortunately, the real story behind the myth didn't get much traction with panicked parents. But that didn't stop the urban legend from growing.

Later on, at the height of the tampered candy scare, the police were warning parents to inspect every piece of their child's Halloween candy before letting them eat it. Hospitals allowed free use of their X-ray machines to check for swallowed razor blades, syringes, and any other sharp object that could be hidden in candy.

While there haven't actually been many cases of kids being hurt by razor blades in candy over the years, there have been a few incidences that heightened parents' cause for concern. According to research by Professor Joel Best, one boy was injured in Minneapolis in 2000 when James Smith was found guilty of tampering with Snickers bars he was handing out for Halloween. In an unrelated story in The New York Times, a child reportedly bit into an apple and found a razor blade. But Best found that, when following up with the majority of reports, approximately 75 percent of all cases were hoaxes, according to Snopes.

These days, the razor blade scare doesn't seem to be as big a problem as it once was. While people are obviously diligent about monitoring their kids' candy, there are bigger worries (creepy clowns, anyone?) weighing on parents' minds.

Still... it might be a good idea to just hand out little chocolate bars or something rather than homemade stuff. Because you don't want to be labeled as one of those kinds of neighbors now, do you?