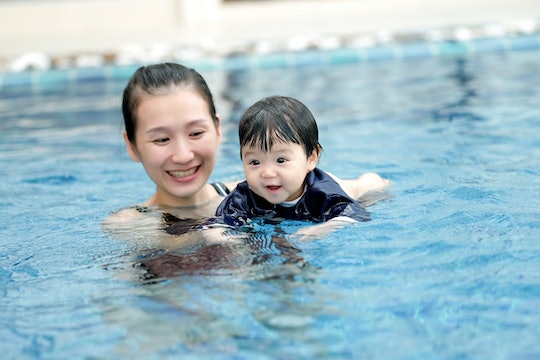 Summer is here and so is swim season, which means it's time to start stocking up on sunscreen, beach toys, and of course, swim diapers. But when it comes to a good swim diaper, you may be wondering: are reusable swim diapers worth it? A lot of moms may want to opt for the disposable swim diapers out of convenience and the fact that their little one doesn't swim all that much. You might think it doesn't make sense to invest in a reusable diaper that you may only use a few times. But after doing a little research, I learned that there's a little more to it than that. Neither reusable or disposable swim diapers absorb like regular diapers do. If they did, your child's diaper would blow up like a marshmallow (Have you ever tried taking your kids in the pool with a regular diaper on? It's pretty funny). Instead, they're designed to just keep your child's waste contained so it doesn't get into the water (yuck).

So if you're on the fence about buying a reusable swim diaper, first think about the cost. A pack of 12 disposable swim diapers costs about $9, which is completely reasonable and won't add up if your child will only go in the water a few times. However, if you have a pool or plan on being at the beach more than 12 times this season (you should also account for diaper changes needed during a trip to the pool or beach), you may want to invest in a few reusable diapers because buying disposable is going to add up.

i play. Boys' Baby Snap Reusable Absorbent Swimsuit Diaper
Target
With the snaps, these reusable diapers can be adjusted to fit your kid's growing needs, too.

You can also think about the cost to the earth. On the website Livestrong, an article sited that the use of disposable diapers has a negative impact on our environment. "The Good Human, a website dedicated to discussing issues related to environmentalism, points out that more than 200,000 trees each year are lost to the manufacture of disposable diapers for babies in the U.S. alone. In addition, it takes 3.4 billion gallons of fuel oil every year to make diapers," the article stated. Aside from diaper manufacturing being responsible for depleting non-renewable energy sources, disposable diapers "take about 500 years to decompose" and even cause "millions of tons of untreated waste added to landfills each year through plastic diapers [and] can contaminate ground water." These findings make cloth diapers an easy choice for the environmentally conscious.

If you're worried about the cost to your wallet, buying reusable will like save you money. Reusable swim diapers cost about the same as disposable swim diapers and they come in some really adorable designs — like this cute pineapple one from Target that has a matching sun hat to go with it. So cute.

Not only are reusable swim diapers better for your wallet and the environment, they have the most adorable design options that you just can't find with disposables. Plus, with the matching accessories, you can make a whole swim outfit out of it.

Baby Boys' Whales Pull-up Reusable Swim Diaper
Target
This adorable reusable swim diaper offers UV protection and up to UPF 50+, and features a friendly whale design. It's made with leak-resistant and waterproof fabric, so waste stays in. Perfect for the pool, beach, or sprinklers.

I know. Now you're thinking about how to clean those. Throw a couple in your pool or beach bag so you have some for diaper changes, but when it's time to clean them up, you just throw them in the washing machine. (Just remove any... solid... surprises first.) It's really that easy. Make it part of your home-from-the-pool routine: put sunscreen back in bags, throw towels and swimsuits out to dry, toss diapers in washing machine.

So are reusable swim diapers worth it? I say 100 percent yes. Not only are they way more adorable, but they actually may save you money in the long run. Plus, you're doing your part in being environmentally responsible, so really, reusables are a win-win-win.

More Like This
Tips to Beat Jet Lag, For You & Your Kids
40 Valentine's Day Outfits Your Girls Will Adore Showing Off This Season
Viral Hives In Children: What Doctors Want You To Know
13 Aquarius Baby Traits & How To Support Your Little Water Sign
What Parents Are Talking About — Delivered Straight To Your Inbox