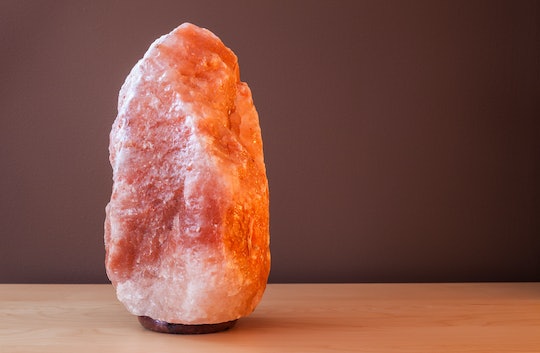 I'll admit I love Himalayan Salt Crystal lamps. They're so pretty. I don't buy into the hype that they're cleaning the air or ionizing my skin or bringing better spiritual energy into my home, I just think they're peachy pink and have a lovely glow. While I never bought one when my daughter was a baby, my best friend had one, and my daughter couldn't stop trying to lick it every time we visited. I have no idea how she figured out that it would taste good, but there you have it. Was I wrong? Are salt lamps safe for babies?

A few years ago, a poorly manufactured salt lamp that was sold at Michael's craft stores across the country was recalled due to faulty mechanisms and wiring that led to home fires and damage to property, reported USA Today. Those were dangerous to everyone, not just your baby. However, provided you're not keeping your child at lamp level and encouraging them to belly up to the salt lamp for their daily dose of sodium, the salt lamp isn't any more or less dangerous than any other lamp in the house. In my own home, my toddler was especially crafty and eager to climb — I'm certain she would've found a way to get her salt fix in. She'd have stacked chairs and enlisted her brother for help when I wasn't looking. I can't imagine explaining that trip to the ER.

Are salt lamps safe for babies if they're purportedly being used therapeutically? There's a ton of hubbub over the supposed beneficial properties of the Himalayan salt lamp, like that it ionizes the air. The claim is that the light bulb shoved into a flavor rock from the mountains will attract humidity toward it and shed negative ions in the air like I shed hair after weaning my children, but according to Snopes, the science doesn't hold water — or humidity. Therefore, if you're expecting a miracle based on negative ions, it's not going to happen. Also, what are those ions meant to do, exactly? I know my ionic hair dryer is supposed to make my dry, frizzy curls less frizzy, but is that a concern with children? I don't think so.

I've also been told by a parent at my son's school who sells these salt lamps that when you combine this salt lamp with a few dashes of Ylang Ylang oil that it will open my mind to spiritual connectivity or to the other side. I'm reasonably certain that if my grandmother found out I'd spent $90 on a salt lamp, that oil of Ylang would cause her to set it aflame, and not just because I'd bought it at Michael's. I'd be able to feel her disappointment from the great beyond. "Why put a lightbulb in your salt, Sparkle Eyes, when you can grate it over dumplings?" Why, indeed, Grandma.

Too much salt for babies and children is a real danger, according to The International Journal of Food Sciences and Nutrition. It can lead to hypertension, gastric distress, and even seizures. Therefore, it is very important to keep the lamp out of the reach of your children, but it's not a huge danger just because it's a salt lamp. It's a building material in this case, just like every other building material. But it would take a lot of lamp licking to get to that level, and it's not like you're just going to sit there and watch your baby gnaw on the side of your pricey lamp. Plus, saliva might change the shape over time, and you picked the one that was just right.