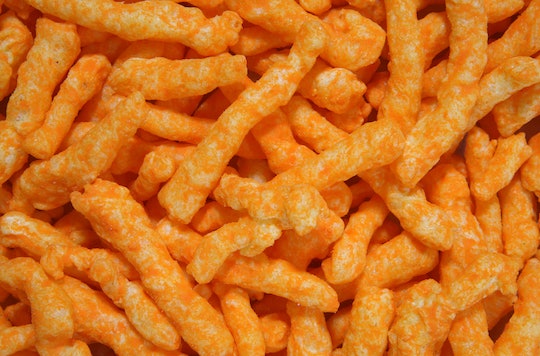 If Spicy Chips Are Your New Craving, Here's How Chowing Down Affects Your Pregnancy

The snack companies that make Cheetos and Takis have recently come under fire for being tied to the reason a 17-year-old girl's gallbladder needed to be removed. An article in USA Today discussed the importance of snacking in moderation and eating a well balanced diet, but it also explained how certain people can be prone to certain gastric ailments due to the acidity that comes with spicy food. But what about eating these types of spicy food while pregnant? Are spicy chips bad during pregnancy? Here are some dos and don'ts when it comes to giving in to those pregnancy cravings.

When I was pregnant, I let loose and ate whatever I wanted whenever I wanted. It's literally the only time in adulthood when it's acceptable to do that for any extended period of time, so I gave in to every craving without shame or guilt. It was glorious. In fact, I became best friends with the guys at my local bagel store because the only thing that would get rid of my nausea was a cinnamon raisin bagel not toasted with cream cheese from one specific bagel place that happened to be on my way to work. Literally nothing else would do. Not no way, not no how was I going to bring myself to any other bagel store, it had to be from that one place. Side note — if you have not experienced a warm, fresh New York City bagel, you're seriously missing out. But cravings can be tricky. What if we crave something that we're not supposed to have?

As a certified nutritional therapist, prenatal trainer and mom, I know that pregnancy cravings can be more than just cravings. Often, our bodies crave foods because that is what our bodies — and our babies — need. For example, if you're craving ice cream, there's a good chance your baby needs some calcium (or maybe mom just wants a treat, which she's totally entitled to). But where do spicy foods fit in?

While some foods are forbidden such as uncooked meats and raw milk because of the possibility of developing food poisoning which could lead to harmful bacteria coming into contact with the baby, unless you've been told by a doctor not to eat a specific spicy food such as hot Cheetos, spicy food is totally safe to eat while pregnant, according to an article on Baby Center. But highly acidic or spicy foods can cause other problems for you such as increasing nausea and heartburn, which is so uncomfortable and zero fun, pregnant or not. Many women suffer from nausea and heartburn during their pregnancies, so why exacerbate it by eating tons of spicy food?

But beyond that, the theory that spicy foods will hurt your gallbladder if you're pregnant or not isn't always true. Dr. Sabrena Noria with Ohio State University Wexner Medical Center told Live Science in an interview, "To my knowledge, something that's spicy doesn't necessarily lead to gallbladder problems." Dr. Noria goes on to explain that foods high in fat, such as potato chips, can actually lead to gallbladder problems instead. It was reported in the same USA Today article that the 17-year-old girl who needed her gallbladder removed was eating very high amounts of these snacks. Obviously, moderation is key. And if you're worried about spicy food inducing labor, that is just a myth. According to BabyMed.com, there is "no known food" that can actually bring on labor contractions. But while there is no statistical medical evidence to this, I know some moms who would swear by it once they're close to their due date.

So, just like with anything else, enjoy your pregnant snacking in moderation. As long as you're eating a well-balanced diet with lots of nourishing foods for both you and your baby, you won't have to worry about the dangers of spicy Cheetos. If you have any gastrointestinal ailments, then you should try to avoid any spicy or highly acidic foods regardless if you're pregnant or not. But of course, always check in with your doctor if you have any concerns.