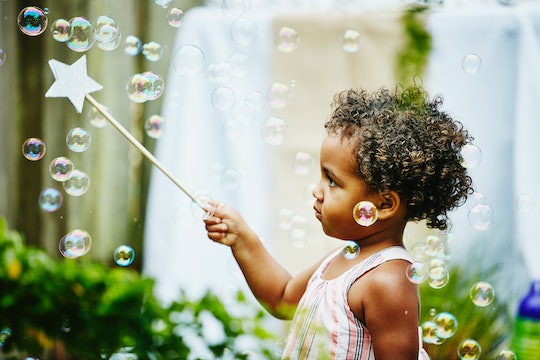 The Magic Age For Potty Training Keeps Rising. Why?

Leak protection. Air-dry channels. Wetness indicators. Absorption areas. Studies show that diapers have come a long way over the past few decades in terms of absorbency. At the same time, we are also seeing that more and more children are beginning to toilet train later. There are some who are pointing the finger at the absorbency of these diapers, but does correlation equal causation in this matter?

The argument could be made stronger when you see that babies in India and the Philippines (where cloth diapers are either equally or more popular than disposables) are potty training earlier than children here (at 11 and 15 months, respectively, per a global study published in Pediatric Dermatology). And then there are countless cloth diapering parents all over the internet swearing that cloth diapers allowed their babies to feel wet, thus prompting them to toilet train sooner. Could they be on to something?

“I see no clinical difference in toddler toileting skills based on cloth or disposable,” says Dr. Natasha Burgert, a pediatrician in Overland Park, Kansas.

Burgert says that while the sensation of wetness or being dirty may potentially be easier for children in cloth diapers, potty training is based on every child’s own developmental progress. Basically, it’s not the diapers.

“Honestly, potty training my cloth-diapered kid was so challenging. My disposable-diapered kid trained at an older age, but also pretty much trained himself by watching his older siblings,” says 41-year-old Steph Montgomery, who is based in Nebraska.

"You can work on training a toddler for weeks, eventually seeing success. Or you can wait until a child is showing interest and readiness skills and toilet train in three days,” says Burgert, who advocates waiting until your child is ready.

Dr. Cherilyn Cecchini, a pediatrician with telemedicine group Your Doctors Online, says a change in how we parent is behind the shift. “There seems to be a more laid-back approach to potty training in recent years and the American Academy of Pediatrics recommends beginning the process when a child shows signs of readiness rather than pushing the child into the process,” says Cecchini.

Indeed, there have been numerous studies about the cultural differences in potty training around the world that likely have more weight on when kids train versus simply what they wear. In Vietnam, for example, a study in the Journal of Pediatric Urology found that all babies from a small sample size of 47 babies were toilet trained by the age of 9 months. In a separate study, Vietnamese and Swedish babies toilet training habits were tracked, and the study found that while most (98%) of Vietnamese babies were trained by 24 months, only 5% of the Swedish babies were trained by the same age. Meanwhile, the American Academy of Pediatrics doesn't recommend introducing toilet training until 18 months of age. So perhaps it’s less about diapers and more about changing attitudes here in the United States — both in attitudes toward training as well as acceptance in regressions.

“[Regression] is a normal part of the process and should not be viewed as a failure, but only a temporary setback,” says Cecchini. She cites significant changes in the life of a child, such as the birth of a new sibling, to weigh more heavily on whether a regression occurs.

Or perhaps there are other factors? Some studies show that delays and regressions in toilet training may be related to constipation, which can lead to a fear of going potty, says Burgert.

Overall, there doesn’t seem to be any concrete evidence to claim that super-absorbent diapers are causing kids to not care about toilet training. While there’s a chance that wetness might prompt some kids to train earlier, others clearly don’t give a poop. Some individuals opt to use elimination communication in order to train their babies early, which can be effective for some children but can also be incredibly time-consuming. Others are fine waiting until their child is ready with certainty to switch into regular underwear, which may lead to fewer accidents (it worked for this reporter).

“In my opinion, the choice of how to diaper a child is simply a personal preference," says Burgert, and you don't want to make it harder than it has to be.

Duong, T., Jansson, U., Hellström, A. (2013) Vietnamese mothers' experiences with potty training procedure for children from birth to 2 years of age. Journal of Pediatric Urology, https://www.sciencedirect.com/science/article/abs/pii/S1477513112002628

Duong, T., Jansson, U., Holmdahl, G., Sillén, U., Hellström, A. (2013) Urinary bladder control during the first 3 years of life in healthy children in Vietnam – A comparison study with Swedish children. Journal of Pediatric Urology, https://www.sciencedirect.com/science/article/abs/pii/S1477513113001198