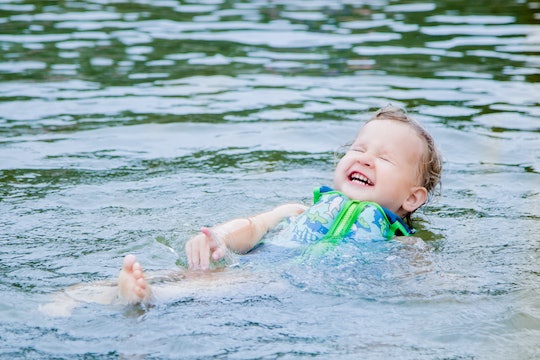 For many families, summer time is synonymous with pool time. Or lake time. Or beach time. Most of my most beloved childhood memories took place on a pool deck or a sandy shore. While the kids are concerned with braving the deep end or holding their breath underwater, parents are rightly concerned with water safety. The topic can be surprisingly confusing to navigate. What's the most effective way to prevent water-related incidents? Are swim vests safe? It's crucial to listen to what the experts have to say.

Water safety for children has become a major topic of discussion in recent years, and for a reason. "More children 1-4 years die from drowning than any other cause of death except birth defects," according to the Centers for Disease Control and Prevention. Several celebrities have started raising awareness after personal tragedies: Olympic skier Bode Miller lost his 19-month-old daughter in a drowning accident last summer, and country singer Granger Smith's 3-year-old son died in their pool this June. Every parent's goal is to prevent the unthinkable, but float vests may not be the way to do this.

First, it's important to understand that float vests should not be used as flotation or safety devices. "There are a variety of different float vests one can buy, however the biggest and most important difference is that float vests act more as swimming aids, and are not U.S. Coast Guard approved," Jenny McCuiston, the co-founder behind Goldfish Swim School, explains to Romper. In other words, these vests might be helpful while you're in the pool helping your child learn to swim, but they are not guaranteed to keep your child's head above water.

Shawn Slevin, a water safety expert from Swim Strong Foundation, a nonprofit organization dedicated to saving lives through water safety education and swim classes, is against float vests and similar products in general. "I hate 'floaties' of any description and think of them as death traps," Slevin tells Romper in a message. "Both parents and children rely on these toys to their detriment." The float vests can provide an illusion of safety, Slevin explains, which can ultimately result in parents taking their eyes off their children and delaying their response if a problem occurs.

And parents aren't the only ones who get a false sense of security from float vests. When children wear flotation devices of any kind, they often incorrectly believe they're able to swim unassisted. "Young children simply cannot make the cognitive connection that the flotation device is allowing them to breathe and play with their head sticking up in the pool," according to the Hand in Hand Water Safety Awareness Foundation.

It's become evident that swim lessons are not only an enjoyable summer past-time, but a way to learn a potentially lifesaving skill. "Learning to swim is a commitment and process mostly built on progressions. We feel that certain tools can be used to assist in the learn to swim process, but should not be relied on as singular teaching tool," explains McCuiston to Romper. "Practicing too frequently with a float vest on can change the body position, resulting in loss of learning & muscle memory."

It's important to realize, too, that drownings can occur in places other than pools and lakes, such as bath tubs and even buckets. Shockingly, according to HealthyChildren.org, "Young children can drown in as little as an inch or two of water, and it can happen quickly and silently." That being said, there is no greater prevention tool than a parent's constant supervision when children are in the vicinity of any water. "Parents must be present and without distraction (at all times) to ensure children are safe while wearing a float vest, or any time they are near the water!" McCuiston emphasizes. Ditch your cell phone, abstain from alcohol, and save the socializing for another time in order to give your child your complete attention.

Each year, hundreds of families face the unthinkable and are left ravaged by a child's drowning death. And many of us, though we might not voice it, hear about these deaths and think, "That couldn't happen to me." But it could happen to anyone; these deaths cannot be chalked up to neglect or bad parenting. With increased awareness about the prevalence of childhood drownings and the hidden dangers of common flotation devices, we can start to eliminate these terrifying, and all too common, horror stories.