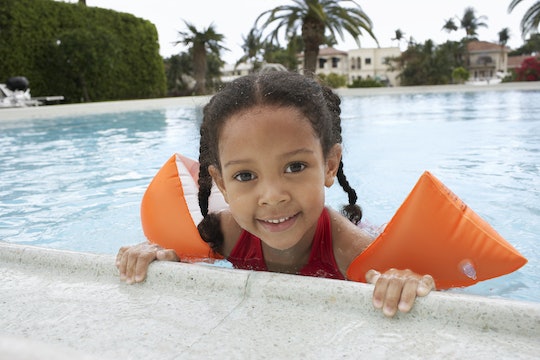 Water Wings Can Actually Put Kids In *Danger* In The Water, Experts Say

Ah, summertime, the season of barbecues, beach trips, and pool days. If your kids are eyeing a rainbow unicorn float or some super cool new water wings at the store before hitting the pool, you should ask yourself, are water wings safe for children? The answer from water safety experts is a resounding, "No."

The American Academy of Pediatrics (AAP) says drowning is the number one cause of death among children aged 1 to 4. Water wings seem like a more comfortable option for kids to enjoy the water compared to life jackets, perhaps allowing them more mobility without fussing over the buckles and straps. But Amy Artuso, senior program manager at The National Safety Council, tells Romper via email that water wings are not considered a safe flotation device.

Wait, so they’re not safe at all? Like, ever? “There is no safe age to use water wings as a form of drowning prevention,” she adds.

Cynthia Dennis, RN, coordinator of Safe Kids Northeast Florida at Wolfson Children’s Hospital of Jacksonville, tells Romper that this is because water wings can actually put children in danger while in the water. “Water wings are not safe for children that don’t swim. If a child can’t swim, the AAP recommends touch supervision and a U.S. Coast Guard-approved life jacket. Basically, the approval means it has been tested and they know it’s buoyant enough to keep the head above water. In the case of water wings, the reason those are not recommended is that they can just slip off. If one slips off a child’s arm, it can throw them face first into the water. And they’re cheap, so they can just deflate sometimes. They give a child a sense of overconfidence in their abilities, so they think they can jump in the water without anyone watching,” Dennis says.

Artuso adds that water wings don’t position a child’s head above water in the same way a life jacket does. “Traditional water wings are not designed to keep children safe from drowning. They provide only a false sense of security. When wearing water wings, a child’s arms stay above the water, but their face is susceptible to ending up in the water, which can result in drowning,” she explains.

One new product, the Puddle Jumper, a water wing and life jacket hybrid, is considered a Type III personal flotation device by the Coast Guard and “approved for calm waters where fast rescue is expected,” per the product’s website. While this may be true, Dennis warns parents to use it exactly as intended.

“With all of these products, it’s important for parents to do a little research and read any owner’s manual that comes with the device to confirm what it’s rated for and intended for. We see this in the safe sleep world, where children suffocate in products because parents didn’t follow the guidelines in the owner’s manual,” she says.

Ultimately, the best way to keep children safe in the water is through constant, undistracted supervision. “There’s really no substitute for constant visual supervision, because drowning is silent and very quick,” says Dennis. “For the littlest children that don’t swim, the AAP recommends keeping your hands on them in the water. A slightly older child who may be too big to hold in your arms still needs that Coast Guard-approved vest, but you need to stay within arm’s reach. The AAP says during swim time, get in the water with your child and if you get out, take them with you.”