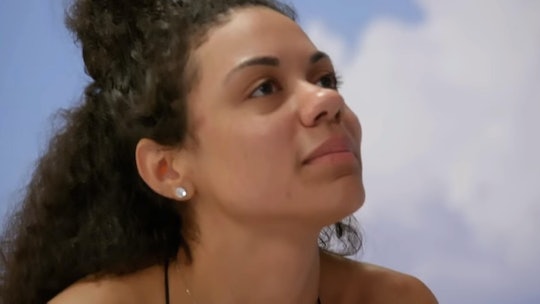 Sorry, But I Don't Know How To Feel About Tevin & Kenya On 'Ex On The Beach'

MTV fans saw plenty of perfect match potential in Kenya Scott and Tevin Grant in Are You the One? Season 7. But after cameras stopped rolling, the couple broke up, and viewers haven't heard much from the pair since. That is, until Ex on the Beach Season 3 premiered with Kenya in the cast. Per usual, the reality star stole the show when she arrived in Malibu, and things became even more interesting when Tevin washed up in the third episode. Given their past, fans are now wondering if Tevin and Kenya are still together. Ex on the Beach fans hope the show will set the couple up for their fairy tale ending.

As of this write-up, it's far too early to predict whether or not Kenya and Tevin are still dating after Ex on the Beach. The MTV reality series just brought Tevin onto the show, so there will probably be more road bumps in upcoming episodes. That said, after a bit of internet sleuthing, I found that Tevin is following Kenya on Instagram. However, Kenya is not following Tevin. The same goes for their respective Twitter accounts, @Kenyaa_NOT and @MTVTEV. They also don't interact much on social media and seem to be living separate lives. Nevertheless, both MTV stars could be trying to keep viewers on their toes before Ex on the Beach airs its finale.

On July 31, Tevin posted a photo, and a fan commented, "I really hope you and Kenya get back together." Tevin liked the comment and replied, "Keep watching @exonthebeach to find out!" So yeah, everyone will just have to wait and see.

Prior to Ex on the Beach, Kenya and Tevin revealed their first split during the Are You the One? Season 7 reunion.

"We're not together, quote unquote," Kenya told MTV News. "We will always love each other, and he's my best friend. The only thing is the distance. We have big goals in life, and we're going to focus on that. But he's my favorite person."

Tevin also explained their relationship to the network. "Not titled — that's the best way to put it," he said. "Between me and Kenya, there's always going to be that love and respect, no matter what."

When Tevin arrived on Ex on the Beach, the reality star told Kenya it would be best to work on their friendship rather than their relationship. But Kenya had something else in mind.

"I didn't know how real this was going to be," Kenya said in a confessional. "So moving forward, I am going to do everything I have to do to prove to this man that I want to be with you, and I'm 100 percent serious about you."

More recently, the Ex on the Beach Twitter shared a preview for the Aug. 22 episode. In the clip, Kenya returns to the house and discusses her relationship with Tevin moving forward.

"Whatever you want to do, I'm cool with," Kenya said. However, she also made it clear the couple would have to eventually decide to "be something" or not.

"I think that you should just cut me," Tevin replied, and Kenya asked if that was what he really wanted. He then smirked and said, "Or kiss me."

The two embraced, and Kenya shared her thoughts in a confessional. "Me and Tevin seem, like, good with each other," she said. "So now I have to hear the storylines. I have to know what's going on."

Looks like Kenya and Tevin are in a good place right now — but will it last? Only time will tell.