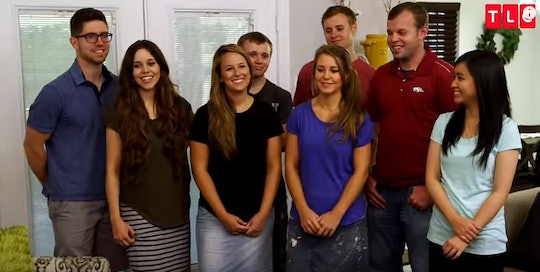 Did Derick Dillard Put A Wedge Between The Bates & Duggars?

As impossible as it is to believe that there are two huge, religious conservative families who have managed to become reality stars, it is a fact. The Bates and Duggars are both TLC stars, and what's even crazier is that they've been friends for many years. When the next generation of either family gets married, they tend to congregate and spend time together, as evidenced by their frequent Instagram posts. But, are the Bates and Duggars still close? It seems that one of the newer members of the Duggar clan might just be too extreme for the Bates.

Derick Dillard, husband to Duggar daughter Jill, has been coming under fire over the past few years for some inflammatory comments. Actually, coming under fire might be putting it mildly. Dillard was released from his contract to appear on TLC's Counting On in November after some transphobic comments about fellow TLC star, Jazz Jennings of I Am Jazz. In a series of tweets written at the time, Dillard asserted that being transgender is a "myth" and that "gender is not fluid... it is ordained by God," according to People. Since then, Dillard has made the incredibly unwise decision to double down on being intolerant with some recent homophobic tweets, this time about Nate Berkus and his husband, Jeremiah Brent of TLC's Nate & Jeremiah By Design. The couple are parents to two children, and Dillard considers their family a "travesty."

Not everyone is impressed with Dillard’s misguided opinions and his stubborn insistence to share them with the general public, no matter how it affects the people in his life -- like the Bates family from TLC’s Bringing Up Bates. An internet sleuth took to Reddit to point out that the Bates family has stopped following Dillard on social media, as has Duggar daughter Jessa’s husband, Ben Seewald. As we all know, unfollowing reality stars on social media is the modern day equivalent of slapping someone across the face with a delicate white glove. So Derick Dillard, consider yourself snubbed.

It makes sense that the Bates family might want to distance themselves from Dillard's open, deliberate homophobia and transphobia. While they are a staunchly conservative fundamentalist Christian family, they have always been a little more middle-of-the-road than the super extreme Duggars. Their courtship rules are not nearly as limiting, plus their daughters actually do things like go to college (well, bible college, but at least it's not home schooling) and wear mid-length skirts as well as pants on the regular.

While the Bates might not be feeling Derick Dillard's judgmental vibe, they seem to remain close with the rest of the family. When Josiah Duggar recently got engaged to fiancee Lauren Swanson, they took a group photo with Nathan Bates, Joe Duggar and his fiancee at the time, Kendra Caldwell.

Then there are the wedding invites, which must fly back and forth like ping pong balls between the two families at this point. When Tori Bates married Bobby Smith in Knoxville, Tennessee last December, the majority of the Duggar family was in attendance (although daughter Jinger Vuolo wasn't there, probably because she's expecting her first child this summer).

If Derick Dillard wants to keep spouting off with his opinions about LGBTQ rights, perhaps he should prepare for the mass exodus of social media followers to continue. Because let's face it, he's not exactly giving the best impression of Christian generosity, tolerance, and understanding. If people continue to pull away from his social media, who will he eventually be ranting to? I fear this does not bode well for his wife, either, as I foresee a long future of Jill Dillard smiling blandly while her husband spouts off his homophobic vitriol, because nobody else wants to hear it.