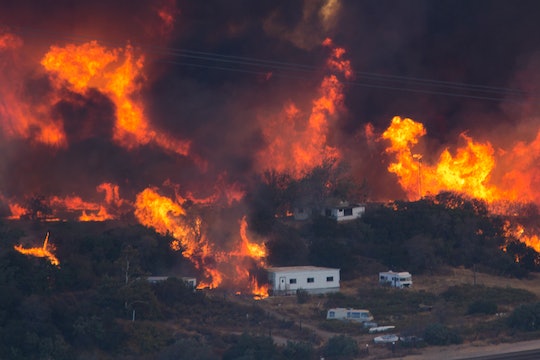 Here's How The California Wildfires Are Affecting Flights To & From LAX

Dry conditions and the notorious Santa Ana winds have caused multiple fires in the Los Angeles area that officials are struggling to put out. As of Thursday morning though, most airlines reported that the California wildfires won't affect flights in and out of Los Angeles International Airport. But that could change at any time.

Earlier this week, California Gov. Jerry Brown declared a state of emergency for Los Angeles, Ventura, Santa Paula, San Bernardino, and surrounding cities. One of the fires in Ventura was the largest and quickest to spread, making it hard to contain by firefighters.

Images of the fires look near apocalyptic as they hopped from major freeway to freeway, forcing closures. Initially, the 405 and the 201, two of the most highly trafficked roadways in the area were closed. According to The New York Times, they have both been reopened, so traffic to the airport should just be its usual level of terrible.

People in the area can check Quickmap for updates on freeway closures and the Los Angeles Department of Transportation website for highway closures.

LAX Wasn't Affected By The Fires

And Many Airlines Weren't Either

But People Were Tweeting Some Scary Traffic Shots

The fires are expected to rage for a few more days, so if you have to travel to or from California, you definitely want to check the traffic and airport situation. Two fires in San Bernardino have been 100 percent contained, but the other fires, such as the Thomas Fire in Ventura was only 5 percent contained on Thursday morning, according to CNN. The Skirball Fire in Bel-Air was 20 percent contained as of Thursday afternoon, the Los Angeles Times reported.

Southern California hasn't seen rain since early spring, which has made everything worse, according to National Weather Service officials. Usually, fire season hits its peak in October and then there's a little rain before the Santa Ana winds, but that didn't happen this year. According to UCLA climate scientist Daniel Swain, who has been tweeting about the fires, October and November this year were the driest months on record for the time period.

Because of the winds, helicopters are having trouble dropping water or flame retardants because it just blows away, making it incredibly difficult to contain the fires.

In many cases, it's all we can do just to try to control the path of the fire, trying to keep it away from people and homes. Stopping a fire when wind is 50, 60, 70 miles per hour is almost not possible. These fires burn into anything that's in their path. A wind-driven fire is like a freight train, and stopping a freight train on a dime doesn't happen.

Luckily, though, on Thursday, the Santa Ana winds were not as bad as firefighters had predicted. They returned, but they weren't strong enough to cause the expected higher flames, which is partly why the freeways were reopened in some areas, according to Los Angeles Fire Department Assistant Chief Armando Hogan's statement to reporters on Thursday.

Officials noted that if the winds died down and firefighters were able to contain more portions of the fires, some of the 200,000 residents that were evacuated might be allowed to return to their homes temporarily to pick up clothes, medicine, and other important items. “What we don’t want to do is pull the trigger prematurely," Hogan added in the same statement to the Los Angeles Times.

Weather officials predict that the winds could pick up again over the weekend, causing the fires to get worse again. However, it appears that Wednesday night was the worst part of the wildfires, and flights were still landing and taking off from the airport. So if you have travel planned or need to help loved ones get out, it's still possible. And let's all hope it stays that way.