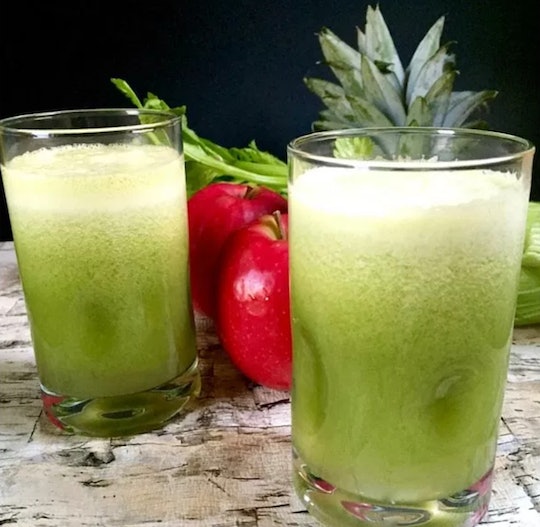 Is Celery Juice Really A Detoxifying Miracle Drink, Or Is It Just... Gross?

I am a real skeptic when it comes to health trends, and yet, I fall prey to many of them. At one time or another, I've tried paleo, keto, veganism, shake diets, and for one unfortunate week in 2006, I did the cabbage soup diet. Do not ask how that went, you don't want to know. Needless to say, juicing is something that's been on my radar for a while. And recently, there's been a surge of interest in drinking celery juice, with many claiming it has miraculous properties. But truly, are there benefits to drinking celery juice? (Because why choke it down if it doesn't do anything?)

As the masses on the internet claim, drinking celery juice can do everything from help you to digest your food to cure your infertility, according to Natural Fertility Info. Who knew? If you look for them, you can find dozens, if not hundreds, of passably scientific-appearing studies in journals of varying levels of credibility touting the benefits of the supposedly magical compounds found in celery juice. Heck, it's so powerful, meat producers are using it instead of chemicals to preserve meats, as McGill University's Office for Science & Society reported. But what is it doing for your body? That's not quite as clear as the writers of those stories would have you believe according to Harriet Hall, M.D., also known as The SkepDoc. A "retired family physician who writes about pseudoscience and questionable medical practices," Hall debunked the theory of celery as a great detoxifier in Skeptic magazine. (In fact, Hall called "detoxification" a "buzzword that is an A+ red flag for pseudoscience.") And it's true that thus far, the peer-reviewed studies about the benefits of celery juice have been mainly limited to rats, and have shown weak results at best, with most being inconclusive.

A spokeswoman for the Academy of Nutrition and Dietetics told Fox 17 of Western Massachusetts that while celery is a great, nutritious snack, drinking celery juice likely doesn't have any real benefits as it's lacking the fiber in celery that makes it good for you. Plus, pure celery juice tastes like someone took the grass from a golf course, blended it with all of your adolescent regret, and then served it to you in an aluminum straw that smells like a rusted tin can. Chilled.

That's not to say I haven't tried it. I absolutely have. Not straight celery juice, that's just madness, and I cannot afford any more of that. Nope, I mix mine with pineapple, cucumber, and a few other things and drink it for chronic bloating. While it does seem to help my rumbly tumbly, it could 100 percent be the placebo effect. If so, the placebo is delicious and would probably taste wonderful with a splash (or five) of gin to carry the grassy flavor into Tipsyville where you don't care about the health benefits one lick.

Are there benefits to drinking celery juice that are actually proven? Yes and no. Celery is rich in a compound called apigenin, which the Journal of Ethnopharmocology found can help prevent gastric cancers in rodents. As humans are not rats, this does not translate exactly to our bodies, but it might point researchers toward new treatments and preventative measures they could prescribe in the future. Also, apigenin, according to the data, doesn't become more bioavailable in juice form; in order to consume therapeutic levels, you would have to eat an incredible amount of celery, likely filling you up before you got anywhere close to enough. (Juicing allows you to consume much more of the nutrients without the bulk.)

One of the biggest purported benefits of celery juice is that it's good for your blood pressure. Again, this is based on a rodent study that looked at celery seed's anti-hypertensive effects. The rats given the seed showed modest improvements in their health, but this isn't as likely in humans, alas.

Bottom line is that celery juice tastes like a baseball field, and probably isn't doing anything more for you than giving you something to talk about on Facebook.