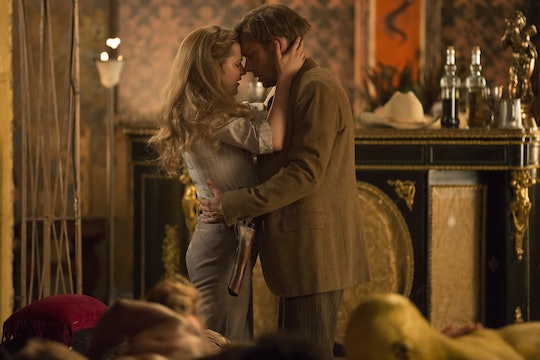 Are There Multiple Timelines On 'Westworld'? There's More To This Park Than Fans Realized

If you keep up with Westworld theories, you've probably heard about the multiple timelines theory. But even if you don't keep up with said theories, this one is pretty simple, though, insanely clever. Many fans believe there are multiple timelines occurring on Westworld, but the way the show is filmed/edited is meant to trick us into believing everything is happening in chronological order. Thankfully, a few die hard fans are just too smart for that.

There are various clues out there that help to support this theory, the biggest of which concerns El Lazo/Lawrence. The first time we saw Lawrence was when the Man in Black saved him from being hanged for his crimes. Since then, he's been dragged along as part of the Man in Black's mission to find the maze. They went to Lawerence's hometown and found his wife (who the Man in Black killed) and his daughter (who revealed the next clue to the maze). After that, the Man in Black continued on with his search with Lawerence in tow — that is, until he decided to slit Lawrence's throat and use his blood to save Teddy.

But here's where things start to really get interesting. Shortly after his death, Lawrence reappeared in the same episode as El Lazo, the man William, Logan, and Dolores have gone off to see. And while it's not strange for a host to die in Westworld and then come back into the game as a different character, what was off about Lawrence's reappearance is that his new persona was already mentioned prior to his death. Why would the writers have created El Lazo before even knowing Lawrence would be available to assume the role? This would suggest that what viewers are seeing happen between El Lazo and William, Lance, and Dolores is taking place at a different point in time than Lawrence's narrative with the Man in Black.

It's clear when the Man in Black first met Lawrence he already knew him, which isn't all that surprising since he's come to the park for 30 years. But the fact that he knew Lawrence would lead him to the maze is telling, especially because Dolores is also looking for the maze and also seemed to believed Lawrence/El Lazo knew something about it. And if there really is a separation in the time periods, that could also help to prove the connecting theory that William and the Man in Black are actually the same person, and their storylines are taking place 30 years apart. In fact, the adventure he's currently on with Dolores could very well be what sets him down the path to become the villainous Man in Black.

The hosts do not age, which is why Dolores would look the same, regardless, around both William and the Man in Black. Furthermore, I've never seen William and Logan with the Man in Black or with any of the workers of Westworld that are clearly in the present day. Even when William and Logan first got to Westworld, they didn't run into any familiar faces from the present. Similarly, after the first episode, Dolores and the Man in Black aren't really shown together again, which seems a bit strange since they're both looking for the same thing and have now both gotten answers from the same person: Lawerence. If they are in the same timeline why haven't their paths crossed again?

There are a lot of questions that Westworld needs to answer, but for now I'll continue to theorize because, let's face it, that's half the fun of watching this insane show.