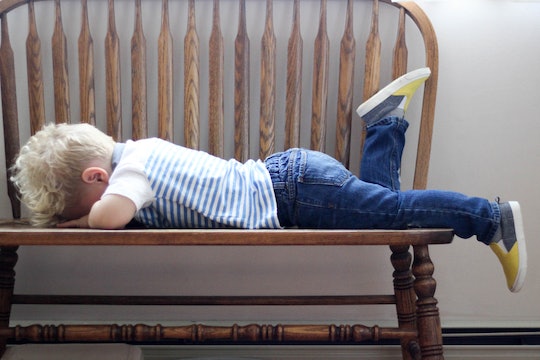 New Study Says Timeouts Can Help Kids, But Only If They're Done "Correctly"

It's difficult to know what to do as a parent when your kid isn't behaving in a way you consider appropriate. Case in point: my 3-year-old son once threw his new book across the room on Christmas morning in a fit of rage because he decided he hated all books that day. What do you do? Let it ride, give him a timeout, cry in the kitchen because you're worried you're doing it all wrong? Apparently Option B might not be such a terrible idea. And if you're wondering whether timeouts are actually effective, a new study found some valid data that supports this controversial parenting tool.

More Like This
Vaccinated People Can Ditch Masks. Where Does That Leave Kids?
How To Find The Best Insect Repellent For Your Kids & Babies
The 7 Best Water Tables For Your Little Ones
The Best Splash Pads For This Summer

Professor Mark Dadds of the University of Sydney, Australia, recently led a study about the nature of using timeouts as an effective way to correct poor behavior in children, as NewsHub reported. For those parents who haven't heard of timeout, it's essentially removing a child from a difficult situation to encourage them to think about their behavior. Generally speaking, the idea is to have children sit somewhere that isn't all that fun or exciting like a chair or a step, for instance.

This method of behavior correction has been a bit polarizing in the past, with some experts claiming timeouts cause more problems than solving them, according to Psychology Today.

Dadds conducted his study, which was recently published in American Psychology, along with other researchers at the Child Behavior Research Center from the University of Sydney. And he explained to NewsHub that parents might have the wrong end of the stick when it comes to timeouts. "Most people think time-out is like solitary confinement or a jail sentence," he told the news outlet.

Dadds explained in the study that he has been studying children's behavior for three decades: "In 30 years, we've treated thousands of kids with disruptive behaviour. When we use time-out as part of a positive parenting program, kids are much happier and much more regulated."

The researchers looked at timeouts "from a mental health perspective, an important yet neglected area," according the study. Specifically, according to the University of Sydney, researchers focused on timeouts used with children between the ages of 2 to 8 years old while also examining "the method among children who had been exposed to traumatic events, such as neglect or abuse, and compared impacts on children who had been removed from their parents."

Dadds noted that his study concluded children who had experienced trauma actually ended up being much happier when parents use timeouts "correctly," according to MedicalXpress. "We are seeing children who’ve had awful life experiences — their behavior is out of control with screaming, biting or hitting — and their parents are being told not to use time-out," Dadds said of the study, as MedicalXpress reported. "The kids get worse. We need to disabuse parents and policy makers of the belief that time-out is harmful."

He added, "Kids get a lot happier when it is used correctly."

Now, how does a parent correctly and effectively enforce a timeout? Dadds had some ideas, which does appear to make a considerable amount of difference. As he told NewsHub, the parenting tool is best used with children between the ages of 2 and 8, and that it needs to be done in a way "where the child feels still safe and secure and loved." Additionally, according to the University of Sydney, Dadds explained that timeouts were "never designed to include isolating the child or withdrawing love or attachment... it is meant to be a very mild form of behaviour management."

Parenting Today of the Child Development Institute also shared some helpful guidelines on how to use timeout properly including:

Every parent obviously needs to make their own decisions about how best to correct behavior as their kids grow. But it's nice to know that, if you are a parent who uses timeouts, you're getting a little validation from this study.