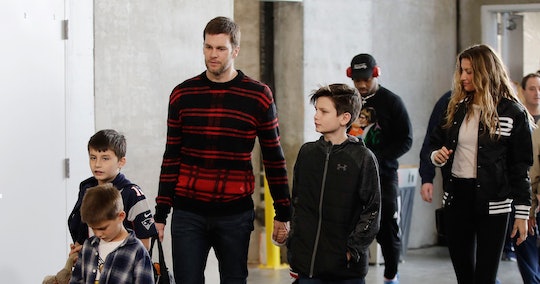 The Super Bowl Sunday festivities were in full swing at Mercedes-Benz Stadium in Atlanta, Georgia, with the seats filling up with football fanatics and Maroon 5 groupies as the Patriots and Rams warmed up. The teams came out onto the field in style, with the king of football himself (aka Tom Brady) leading the Pats and looking totally unimpressed by his surroundings. The quarterback may be a little over the whole Super Bowl thing by now, but were Tom Brady's kids at Super Bowl LIII? They actually showed up early.

The charismatic Patriots quarterback has led his team to win five times in eight Super Bowl match ups throughout his career with the team, as Sports Illustrated reported, but the number of triumphs hasn't made him or his family any less excited for Super Bowl LIII. Indeed, Brady confirmed his whole "Brady bunch" would be attending the big game in an interview on the Thursday before the game, according to CBS Boston, sharing his excitement that his kids are getting older and will now have a better appreciation for what the Super Bowl really is. Brady married supermodel Gisele Bündchen in 2006, and they have two kids together, Benjamin (9) and Vivian (6). Brady's eldest son Jack (11) is from his relationship with his ex-girlfriend Bridget Moynahan, according to E!.

"They’re at an age where they understand so much more and it’s really fun to have them and talk to my son Jack about the game and what he thought about the game," Brady said of his children in an interview with CBS Boston. "‘Dad, what were you doing on this play? Why didn’t you just do this?’ He watches football and his buddies talk about football; it’s just a great thing for a dad."

According to Brady, his eldest has the most appreciation for the sport, but his middle child Benjamin seems to be more excited for "popcorn and a bunch of junk food" than the game itself. Vivian shares big brother Jack's enthusiasm, and Brady and Bündchen often share photos of their little girl cheering on her dad at games, serving as an unofficial cheerleader for the Patriots, as you can see from this sweet snapshot Gisele posted of Vivian getting ready for the big game.

Brady also announced that his extended family would be attending the Super Bowl this year, with his nieces and nephews, in-laws, and even some close friends making the trek to Atlanta to watch the legendary quarterback fight for yet another ring, according to CBS Boston. And there's a good reason why: If the Patriots win this year, 41-year-old Brady will "stand alone as the player with the most Super Bowl wins in NFL history" according to Sports Illustrated. The win would also make coach Bill Belichick the NFL coach with the most Super Bowl wins. The Pats lost to the Ravens last year, so only time will tell if Brady will be able to pull out another win for his team.

Win or lose, all of the Brady's were ready to hug the quarterback after the game.