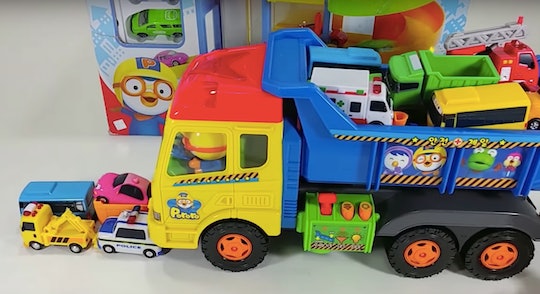 Some Of Korea's Most Popular Toys Might Look Familiar To You

Obviously, kids love to have fun no matter where they grow up. But how do the types of toys differ between countries? With everyone's eye on South Korea this year for the 2018 Winter Olympics, it's easy to wonder how those children's play time differs from kids in America. Are toys in Korea different from toys in America? Since North Korea is so private, among other things, I'm not sure about the toy situation there. But as far as South Korea goes, there was a little bit more information.

Of course, the big name brands like Little Tikes and Disney, for example, are popular everywhere, and that includes South Korea. Korean-based toys span both countries as well. Tayo the Little Bus, which was created in South Korea, inspires wind-up toy electric vehicles that are popular in both America and Korea, as it was “English-dubbed” for the United States in 2013 and can be seen on Hulu and Netflix. The premise follows electric vehicles like Tayo, who is just starting his career as a little bus in the big city. I'd say the main difference here is this Korean-based show's vehicles and other modes of transportation are electric, unlike America's Thomas the Tank Engine, and other shows focusing on transportation, for example.

Children’s interests are the same no matter where you live, and South Korea is no different. There are many toys that inspire “pretend play” and require kids to use their imagination. Toys like pretend kitchens, dolls, workshops, grills, stuffed animals, baby cribs, and toy vacuums are popular among South Korean children and American children alike — though the way some of the items look are different, based on where you live, like the vacuum cleaner.

American kids love to use toys and gadgets created from their favorite books, and South Korean kids are no different. In South Korea, some top-selling toys come from a popular Manga, Beyblade Burst, and are manufactured by Takara Tomy, which also creates the popular “Koeda-chan,” “Licca-chan,” “Tomica,” and “Plarail” toys. Incidentally, you can also purchase these toys in the U.S.

Other popular Korean toy brands, according to the website, Korean Toy Shop, include The Little Penguin Pororo, Robocar Poli and Super Wings (which both remind me of Paw Patrol), Tobot, Kakao Friends accessories (which are based on KakaoTalk emoticons), and Larva, which looks reminiscent of '90s Nickelodeon cartoons or Pixar characters. And of course, all of these toys have similar American toys, and some of the Korean toys are even sold here in the United States. Thanks Amazon and thanks Netflix for bringing those cartoons to anyone's TV.

The electronic and robotic toys are similar as well, like Gogo Dino Transformers, and there are a lot of toys that require your kid to "transform" the toys into different objects themselves, like the Biklonz 4 Scorpio Transformer Robot, and other Biklonz toys. These are similar to our Transformers toys, among others.

Learning through play, using your imagination, and curious minds in children are universal attributes. No matter where you are, kids will love to play, use their imaginations, and be creative — whether it's with dolls, pretend workshops, or even crayons and coloring books. Toy, book, and children's entertainment companies are aware of this, and most toys are universally created with kids' interests in mind. Though some of the characters may be different, the concept and intent behind them are the same.