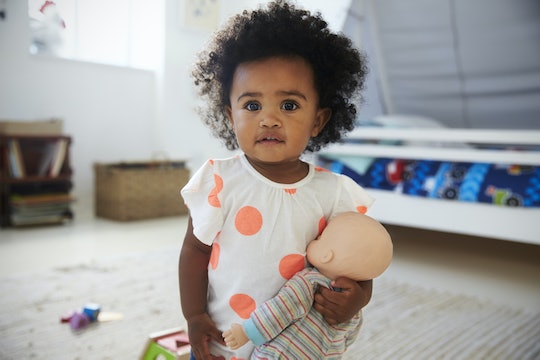 When we were kids, the value and validity of gender roles wasn't a big topic of conversation when it came to parenting — it was just assumed. Though there were exceptions, by and large our parents didn't worry about whether the toys we played with, for example, sent the wrong messages about men and women. Things have changed, however. Today the issues of equality, tolerance, misogyny, and power are weighing heavily on everyone's minds, and the expectations once placed on humans based on their sex are fading. Correspondingly, the question of how to handle gender roles in kids has become a topic of much debate. That's why we chose to focus on this complicated subject for the first episode of our Bearing the Motherload video series, in which two parents with different takes on the same issue sit down with a mediator and listen to each other's perspectives, while also getting input from experts.

While plenty of parents out there are grateful for our society's slow shift toward tolerance and what it means for their kids, others worry that the blurring of rigid gender divisions is too confusing for their children and will somehow damage them. Case in point: The social media meltdown that occurred when Sarah Michelle Gellar recently got matching manicures with her son Rocky.

While many fans loved the idea, other commenters were outraged, going so far as to accuse Gellar of "brainwashing" Rocky. Many of these negative reactions, one would assume, are based in beliefs that parents were raised on themselves. Experts, however, say their resulting concerns aren't backed up by science; in fact, enforcing gender roles can do more harm than good to kids.

"Research has shown that gender-divided activities are harmful for kids because they create and strengthen gender stereotypes," Dr. Christia Spears Brown, a development psychologist who appears in the episode, tells Romper.

"When we divide by gender, this sends the message to children that gender is extremely important," Dr. Brown, who is the author of Parenting Beyond Pink and Blue, continues. "Otherwise, we wouldn’t always use it to categorize people. Children then take it an extra step and assume, if gender is really important, then the differences must be innate, inevitable, and unchangeable."

As Dr. Brown points out, this might not seem like a big deal when you're talking about preferring trucks to baby dolls. But if kids believe that gender is so important that boys and girls need different toys and activities, then it's not a huge leap for them to believe everything about boys and girls must be different (including things like math, science, and leadership abilities).

It makes sense: These ideas seep into our consciousness in such a subtle (yet unrelenting) way that we don't even realize our entire way of thinking is being impacted. That's not to say, of course, that exposing your kids to traditionally gendered activities and the like is necessarily going to damage them.

"Having gender divided activities and their impact on a child’s development depends largely on the relationship between the parent and child, and moreover the parent’s acceptance or rejection of their child’s gender expression," the episode's other expert, Meredith Shirey, MS, LMFT, tells Romper.

"For example, are 'father-daughter' dances harmful to a cisgender female child and her cisgender male father? Probably not. However, if a child born female but identifying as male is forced to go to such an event, and wear clothing and act in ways that are inconsistent with the child’s gender expression, it could be potentially harmful to the child," she explains. It's not too difficult to put one and two together: If a child is forced to conform to a stereotypical gender-based uniform — or anything for that matter — that makes them feel completely uncomfortable, how could they not have an adverse reaction?

Shirey goes on to describe the long-term effects this can have on a child's self-esteem and overall mental well-being: "The rate of serious mental health issues (specifically self-injurious behaviors and suicide) among LGBTQ children, teens, and young adults is staggering. Most suicides from this population stem from pervasive feelings of internalized shame and rejection, mostly from caregivers and immediate family that do not accept the child as they are."

So basically (as with all the other parenting stuff), how you handle this should depend on your kid.

In some cases, traditional gender roles can actually be positive. For example, the concepts are easy for little ones to wrap their heads around. When children are very young, Shirey says, they don't yet have the ability to make abstract distinctions (they way adults do).

"Children may not be able to understand the complexities of gender expression versus biological sex, and tend to categorize their world in very simplistic ways," she says. "Parents who choose to take a more gender-neutral approach to child-rearing must keep their children’s developmental and cognitive abilities in mind."

If dressing all in glittery pink is your daughter's thing or your son is genuinely obsessed with football and superheroes, that's cool — it's all about following your kid's lead and embracing it.

The goal isn't so much "gender neutral" as it is "gender irrelevant," Dr. Brown explains.

"Instead focus on the traits, skills, and qualities all people should have — empathy, nurturance, mechanical skills, assertiveness, hand-eye coordination, emotional awareness. They shouldn’t be male or female traits, but human traits." And interestingly, one of the best toys to teach children — boys and girls — a universal trait like nurturing is a doll, which we all know is typically pegged as a "girl" toy.

"Focusing on these universal qualities, and ignoring which gender is 'supposed' to be good at each, is only associated with advantages and no disadvantages," concludes Dr. Brown.

And of course, children learn best by example. So even if we don't always agree on the best way to approach this particular aspect of child-rearing (or any other), we should always try to be respectful of other peoples' parenting styles. Tolerance begins at home.