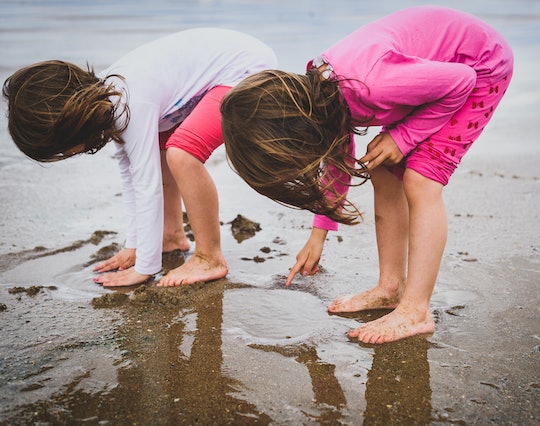 Are Twins Closer Than Non-Twin Siblings?

It’s a safe bet you either are a twin, know a twin, or have twins. According to the American Pregnancy Association, the number of women having multiples has increased over the last 20 years, primarily because one-third of women having babies are more than 30 years old. Did you know that if you're over 30, you have a higher chance at having multiples? There’s also been an increase of women using fertility drugs and procedures, which is also known to cause multiples in pregnancy. But when it comes to parenting twins, are twins closer than non-twin siblings?

"Twins tend to be closer than typical siblings — they share a bond that is oftentimes unexplainable," Maureen Healy, an expert on sensitive children and author of Growing Happy Kids, tells Romper. "Many believe this is rooted in genetics, such as identical twins sharing the same DNA."

"Fraternal twins, though, are two genetically unique beings, as if you had two regular siblings just at the same time, and they, again, oftentimes have a close connection," Healy says. Identical twins develop from a single fertilized egg that splits, making them "monozygotic." And Healy says there is another theory that the prenatal period where they share the same womb creates a place where this closer connection is formed.

"Although scientists don't exactly understand the causes, it's repeated throughout many case studies globally," she adds.

For example, Denver native Andrew Villegas tells Romper he is certain that when he and his identical twin brother, Kevin, were younger, he was able to speak with Kevin before either of them could talk — and could understand him perfectly.

Now, at 33 years old, with Kevin still living in Denver and Andrew living in Kentucky as a copy editor for Rewire, Villegas says, "But there have been some days, pretty recently, where I felt down, and didn't realize until talking to Kevin later that we were feeling the same way. Now that could be attributed to just our general moods being similar a lot, but there's no doubt that we have a special bond other types of siblings probably don't have." He adds that he can basically "read Kevin like a book at all times," but is unsure if it's because of a connection or because he spent "the first 22 years" of his life with this brother.

Autumn Decker from Atlanta says she and her identical twin, Summer, went to two separate stores for Father's Day and picked out the same exact card for their dad. (Also can we just stop to appreciate how cute of an idea their names are? Good job, parents.)

"There are definitely times when something is going in on her life and I feel like I'm going through it as well, even though I'm not," Decker says.

Angel Grumbein from Marietta, Georgia, says she and her fraternal twin, Vicky, can't read each other's minds necessarily, but something intriguing happened when they were teenagers. "I was driving home and felt something wrong and knew it had to do with her," she recalls. "Vicky had passed out at work and was ill." Goosebumps aside, Grumbein says there are other weird things happen, like when they pick out clothes. "Another thing is we routinely dress in the same colors, but not purposely," she says. "We'll show up somewhere and be dressed almost exactly alike and it's not planned."

"Identical twins that look 99 percent like each other have the challenge of differentiating him or herself from the other while staying connected. Their identity formation is unique, because they're immediately thought of as a twin first, and then an individual second," she says.

Healy notes that she once worked with grown twins in a Fortune 100 company, "and they both became lawyers (interestingly enough), yet developed unique specialities. But after work, they lived together, shared clothes, and remained incredibly close as 30-something adults."

It seems like twins can sometimes be considered closer than single siblings, just because they have a unique bond that other siblings just don’t have — they shared a womb for nine months. They literally grew up together and have never known life without the other. However, Healy suggests, "But we must remember the tendency is for twins to be closer than regular siblings, but that's not always the case."

Twins apparently have super powers of telepathy, and I'm so jealous. How comforting would it be to have a built-in best friend who knew you so well that they could read your mind without you saying anything? This isn't to say that non-twin siblings aren't just as close, but it seems like twins have a deeper and almost magical connection on an entirely different level that "non-twins" will never experience or understand.

More Like This
Experts Explain Whether It’s Safe For Your Baby To Sleep On Your Chest
The Difference Between The PICU & The NICU
Baby-Led Weaning: A Comprehensive Guide To Introducing Solids
There’s A Reason Your Baby Always Falls Asleep While Breastfeeding