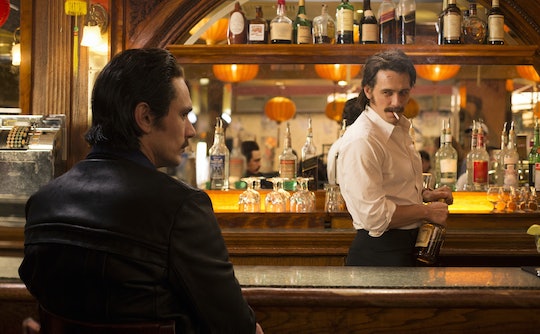 James Franco Is Pulling Double Duty On 'The Deuce'

These days, if you go to Times Square in New York City, you're likely to be crushed by a throng of tourists, chain restaurants like Red Lobster and Applebee's, street magicians, and people dressed up like cartoon characters. But in the '70s, Times Square was an entirely different place, and certainly not quite so family friendly. In 1971, which is the time period in which The Deuce is set, it was a hub of illicit activity, rife with drugs, sex shops, and prostitutes on the streets. There were also, of course, bars, including the one run by Vincent Martino, who was based on a real person who also had a real twin brother.

Franco, who plays both brothers, talked a little bit about the character to Paste magazine in an article about the new show. "My character, Vincent, is based on an actual guy who had a twin brother," Franco said, adding:

He had run this bar around the Times Square area that was very unusual because it was a melting pot of all areas of social levels. At the time, you certainly had gay bars and straight bars. But rarely did you have a bar where they would mix and they would mix with police officers and the Warhol crowd and trans customers.

Though the real-life inspiration for the character played by Franco unfortunately died before Franco had the chance to meet him, he may have been pleased that HBO was featuring him in a new show. Franco revealed that this was a guy who had "90 hours of recordings he did on his own in his living room, dreaming of meeting someone like the creator of The Wire to come and tell his story."

It looks like he got his wish. So far, The Deuce has been getting mostly positive reviews for its no-holds-barred look at the seedy underbelly of New York City in the '70s. Just as the characters are based on real people, the city they inhabit is real too.