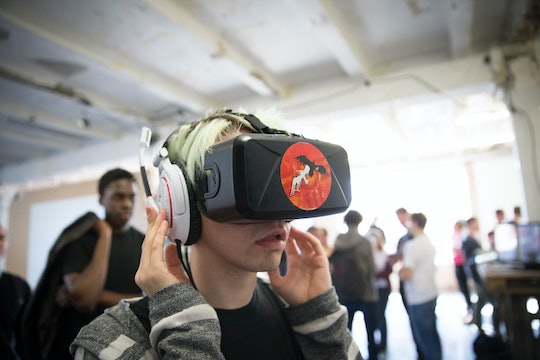 This Christmas, while younger kids scramble under the tree to find their Hatchimals or Fuzzy Wonderz, older kids will be looking out for another gift: virtual reality (VR) headsets.

Once considered the realm of science fiction, virtual reality systems are now getting much cheaper and more accessible: while high-end models like the HTC Vive can run you up to $800, some models like the Samsung Gear VR (which requires a Samsung phone) cost as little as $80. But in the age of endless screen time, is it really advisable to strap a screen to your child’s face?

The answer to this question is more complicated than you'd think. While most virtual reality systems come with a warning that they’re not to be used by children under the age of 12 or 13, it’s unclear if there's any actual scientific basis for those warnings.

“Children may interpret things literally. They see a cartoon or something animated. They believe that it is literally occurring and they believe it to be real.”

“There isn’t a lot of research of VR in children,” says Yolanda Reid Chassiakos, assistant professor at the University of California, Los Angeles and the lead author of the American Academy of Pediatrics’ (AAP) recent report on digital media in children and adolescents.

While the study doesn’t make any mention of virtual reality, the report does mention that violent video games are not appropriate for young children.

“Children may interpret things literally,” Chassiakos said. “They see a cartoon or something animated. They believe that it is literally occurring and they believe it to be real.”

Citing the lack of research, Chassiakos said she couldn’t comment on how a virtual reality experience might be different for a child’s developing eyes and brain, compared to viewing a smartphone screen or playing traditional video games on the television. But some researchers have suggested it’s possible having bright screens mere inches from the eyes may cause eye strain. While there's little long-term evidence to suggest that VR will cause permanent eye damage, it is true that even adult users have complained about VR headsets causing dizziness or nausea, a condition known as "cybersickness."

Virtual and augmented reality might become a $4 billion industry by 2018.

But that hasn't stopped people from buying them. According to Forbes, by October 2016, HTC had sold 140,000 Vive headsets since it launched in April. While that number pales in comparison to, say, the monthly sales figures for the iPhone, HTC is prepared to sell 400,000 units by the end of the year, and CCS Insight predicts that virtual and augmented reality might become a $4 billion industry by 2018.

Melody Elliott, 32, a mortgage compliance specialist and mother of a 9-year-old girl and 3-year-old boy, said she would consider virtual reality for her children, though she'd prefer to wait until they're a bit older. While her kids haven’t asked for a VR set yet, her daughter already enjoys playing video games, and Elliott is definitely conscious of limiting her screen time.

“I think I would definitely limit the amount of time in VR,” Elliott said. “I’d really like to limit to 30-45 minutes. It’s just like being on a treadmill. You get off and you [feel] different, so it takes that moment to adjust.”

I just see [VR] as one more aspect of him being a kid. He’s playing, just in a different way.

But Ian McConville, 34, an artist for the mobile game Slime Rancher, says that he hasn’t had any problems when he lets his three-year-old son, Aidan, play with his HTC Vive.

“I’m not really that concerned about video games as being some sort of corrupting influence. The kid is very imaginative, and he plays and plays and plays. He loves to read with his grandparents. I just see [VR] as one more aspect of him being a kid. He’s playing, just in a different way,” McConville said.

“As far as I can tell, he just thinks of it as another type of Game Boy,” McConville said.

McConville lets Aidan play “sandbox”-type virtual reality games. Unlike games for older kids, they're less about completing goals and objectives and more geared toward exploring and tinkering with a virtual world. The most famous example of a sandbox game, Minecraft, has its own virtual reality version.

McConville said Aidan particularly enjoys another whimsical sandbox game called Job Simulator, which takes place in a future where all jobs are automated and humans play job simulations for recreation. Aidan is particularly fond of the kitchen level.

Though Aidan is in his own virtual world, he knows his dad is in the room with him watching (and making sure he doesn’t bump into things). They interact even though Aidan can’t see him. Aidan will make food for his dad in Job Simulator, not unlike how he might make pretend food in a real-life play kitchen set.

"We should be realistic about new technologies. A lot of things we’re afraid of don’t happen, and the most banal thing does happen."

McConville does limit the amount of time Aidan spends in virtual reality, but mainly out of concern over his son’s potential inability to detect the warning signs of motion sickness.

Marientina Gotsis, a professor at the University of Southern California whose research utilizes virtual reality on children, said those sorts of simple issues—motion sickness, bumping into things, and falling—are often the ones we fail to consider when we're confronted with new technology, while we’re worrying about ones that may not exist.

“We look at all these new technologies in the same way. We look at what’s going to be positive about it and what to watch out for, but we should be realistic about it,” Gotsis said. “Because a lot of things we’re afraid of don’t happen, and the most banal thing – falling – does happen.”

Both Gotsis and Chassiakos said that virtual reality might have potential to serve as an enriching form of entertainment for children. And there are devices on the market that are already geared toward children. If you remember the old Mattel View Master, for instance, where you’d switch between 3-D images, there's now a virtual reality version designed for kids.

The most important thing to look out for is content, Chassiakos and Gotsis both said. The content should be age-appropriate and non-violent. They also recommended parents start a dialogue with their kids to talk about the virtual experience, and to set good examples themselves by not over-using media.

"They haven’t even begun to make sense of the world yet. You have to wait before it gets manipulated with something virtual."

The American Academy of Pediatrics website has an interactive guide called the Family Media Use Planner that families can use to make sure they’re getting in a good balance of exercise, family social time, and personal media entertainment. But ultimately, it comes down to what feels right.

“I would prefer even my daughter being a little bit older before she dives in,” Elliott said. “But I think 5 to 6 years old is a little too young to start that. They haven’t even begun to make sense of the world yet. You have to wait before it gets manipulated with something virtual.”