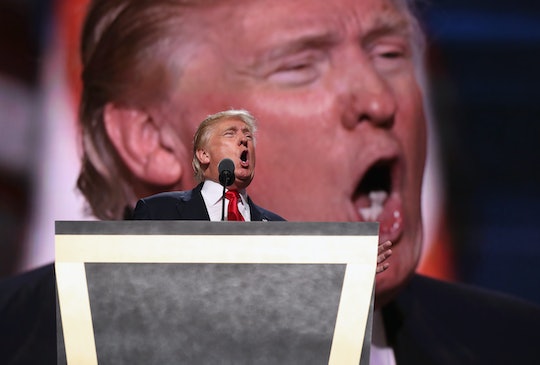 Are Vladimir Putin & Donald Trump Working Together? There Have Been A Few Hints

This election could very well go down in history as one of the most surreal, contentious battles for the presidency in America to date, and there is clearly no sign of the situation tapering off. After the Democratic National Convention experienced a data breach that leaked over 33,000 emails to WikiLeaks from the DNC's computer servers, experts concluded that the leak was the work of two Russian intelligence agencies, according to The New York Times. There is evidence that Putin could be attempting to sway the election in favor of Republican nominee Donald Trump, and could that mean that Putin and Trump are working together? In a recent Twitter update (clearly Trump's favorite method of communicating), the New York businessman publicly asked Russia to have a look at Clinton's emails and share them with the FBI.

Both Putin and Trump have denied claims by Democrats that Russia had any involvement in the data hack of the DNC. In Moscow, Kremlin spokesperson Dmitry Pescov told journalists;

The only thing I can tell -- President Putin said numerous times that Russia has never interfered and doesn't interfere in domestic affairs of other countries, especially in electing campaigns. Moscow carefully avoids any actions or words that might be seen as interference in an electoral process.‌

Whether or not Trump has the ear of the Russian president, he was very clear that he would like Putin to do a little dirty work for him. At a news conference on Wednesday, Trump spoke directly to the cameras and said;

Russia, if you’re listening, I hope you’re able to find the 30,000 emails that are missing. I think you will probably be rewarded mightily by our press.

At that same news conference in Florida, Trump refused to call on Putin to stay out of the electoral process; "I'm not going to tell Putin what to do. Why should I tell Putin what to do?" Apparently "not telling Putin what to do" and directly asking Russia to hack a presidential nominee's email and threaten America's national security is not the same thing. Trump went on to say that a "President Trump would be so much better for US-Russia relations" than a President Clinton.

While Trump's relationship with Putin is still mostly unclear, a few red flags have come up in recent months. Paul Manafort, Trump's campaign chairman, worked closely with ousted Ukranian Prime Minister (and Putin ally) Viktor Yanukovych. According to journalist Josh Marshall, who closely follows Trump's links to Russia, Trump has cut ties to many US banks and, "has steadied and rebuilt his financial empire with a heavy reliance on capital from Russia".

For his part, Putin has praised Trump as being "bright" and "very talented", which had a giddy Trump responding on Morning Joe with, “When people call you ‘brilliant’ it’s always good, especially when the person heads up Russia,”

So here is the real question; if a presidential candidate openly attempts to incite a national security risk and calls on a foreign country to meddle in a domestic election, what happens next?

My guess? His polls will go up.