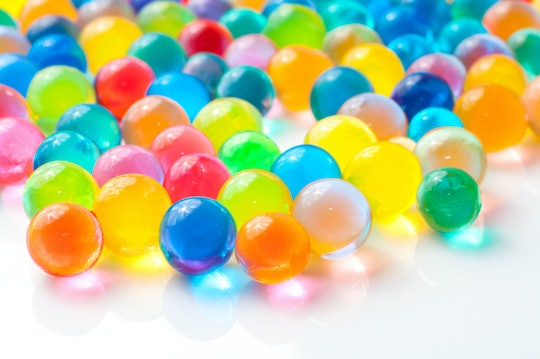 You'll Want To Supervise Your Kid With Water Beads

It can be hard to keep up with the newest and latest toys and crafts, especially if your kids seem to jump from one activity to the other, but one craze has a lot of parents interested: water beads. The colorful, water-absorbing crafts have been considered a great trick for sensory play (and a lot of fun in general), but are water beads safe? The marble-like objects have some parents feeling concerned, especially if their child likes to put things in their mouth.

According to the American Academy of Pediatrics (AAP), water beads are non-toxic, water-absorbing gel beads that can be used as decoration in vases or as a children's toy. They start off as a tiny, hard ball, but when water is added, they can grow to at least 200 times their size. They have a fun texture and feel squishy, so many parents use them in buckets or bins for kids to scoop them up and play, or even in paddling pools. But the versatile craft isn't exactly the safest one to engage your toddlers in.

Sarah Brown, community safety expert for SafeWise, tells Romper that she does not recommend water beads as a safe toy for kids. "If they are swallowed, they can create an obstruction in the child's gastrointestinal tract," Brown says. "The water pods expand to over 400 times their original size, and they can expand inside your child's body. Many children have undergone surgery because of these water pods; some children have swallowed several, needing extensive surgery."

The AAP agrees with Brown. On its website, the AAP also noted that there have been several cases of children swallowing the beads when they are hard, leading them to the emergency room as they expand inside of their stomachs. Some children have also been known to place them in their ears and, in one particular case, the bead expanded, causing permanent hearing loss and ear drum damage.

Brown says that the swallowing of water beads is reminiscent of the horror stories surrounding detergent pods. "Since water beads are brightly colored, children want to put them in their mouths like candy," she says. "A similar instance happened with detergent pods poisoning babies. Because of the bright colors in these laundry detergent pods, small children ingested them and were hospitalized." Brown notes that if your child does swallow a water bead or stick it in any part of their body, they should be taken to the emergency room.

Does that mean your 10 year old can't enjoy using water beads in play? Maybe not. But with so many cautions against the product, be sure to supervise your children, no matter what, if they are playing with these water beads. The risk is too great to ignore.