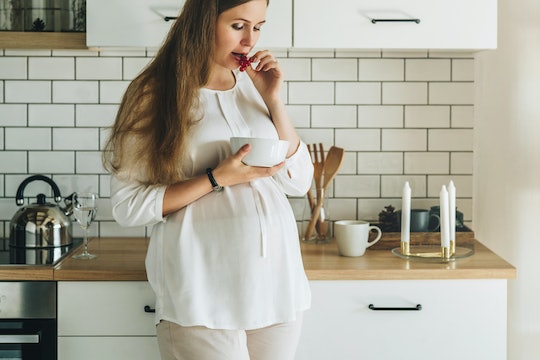 Here's How Being Pregnant With Twins Can Affect Your Appetite

There are many old wives' tales about determining the sex of your baby early, everything from how high or low you’re carrying, to the time of year you conceive. And apparently, there’s now scientific data to prove that the intensity of your morning sickness can also tell you what your baby’s sex will be. But what about twins? Are you more hungry when pregnant with twins? Maybe your appetite could be the sign you needed that you're having multiples, but does making two babies also just make you super starving?

I decided to ask an OB-GYN who is a twin himself whether or not you're hungrier when pregnant with twins — so meta. And Dr. Jamil Abdur-Rahman, OB-GYN, medical travel blogger, and one-half of the Twin Doctors for TwinDoctorsTV tells Romper, “Yes and no.” He says at first, thanks to those wretched pregnancy hormones, many women’s appetites are diminished. “Mainly progesterone, estrogen, and human chorionic gonadotropin (HcG) tend to be very high in the first trimester. These high hormone levels result both in lots of nausea and in a sluggish GI tract,” Abdur-Rahman explains. “Because these hormones cause a sluggish GI tract (i.e., they make the muscles around the GI less active), food moves through the GI tract more slowly. And this results in women who are pregnant with twins feeling fuller longer, especially in the first trimester.”

However, once your GI tract gets back on, well, track, and the nausea reduces, you get hungrier, and once you do, “it tends to be more pronounced in women who are pregnant with twins because the body requires more energy in the form of calories to grow two babies than it does to grow one,” Abdur-Rahman says. Turns out, you'll need between 300 to 900 additional calories per day — depending on your body type and health prior to pregnancy — when you’re pregnant with twins, so being extra hungry isn’t a problem. It’s actually a good thing.

As for how many calories you should consume per day in each trimester, Abdur-Rahman explains, “In the first trimester, a woman who is pregnant with twins should eat 400 additional calories per day. A woman who is pregnant with twins in the second and third trimesters should consume an additional 600 calories per day. And total weight gain for women with an 'average; BMI should gain between 35 to 45 pounds total for their pregnancy."

What are some early signs you may be carrying twins, since hunger may not necessarily be one of them thanks to morning sickness and nausea? Abdur-Rahman says, “Honestly, there aren't many early signs that indicate that a woman is pregnant with twins.” However, he does say that the fatigue, nausea, and vomiting can be more pronounced in women having multiples, because there will be higher levels of estrogen, progesterone, and hCG. “But, relying on this as an indicator that someone might be pregnant with twins would be pretty inaccurate as different people respond to those hormones differently. So, some women with twins might not experience much nausea, vomiting and fatigue at all, while some women with a 'singleton' might have severe nausea, vomiting, and fatigue,” he adds.

So if you’re having twins, you will definitely have the potential to be hungrier than a woman carrying one baby. Think of it as your body’s way of indicating that you need to eat more calories — between 300 to 900 per day — than other pregnant women. Though most pregnancy books say this doesn’t mean to spend $50 at Taco Bell necessarily, you do you. Being pregnant with one baby at a time is hard enough, I can’t imagine carrying two.