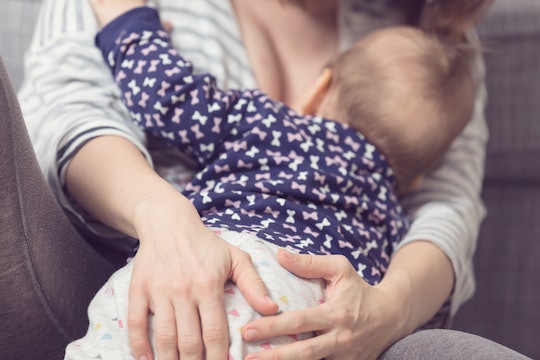 Turns Out, You're More Likely To Develop Mastitis In Colder Weather, & Here's Why

For anyone who's experienced mastitis, they know how unbelievably awful it can be. Incredible breast pain, hot spots on your breasts, painful milk ejection, and fevers are just some of the fun times you can expect when you have mastitis. When I had it, it felt as though someone was stabbing me in the boob over and over again as I succumbed to terrible dizziness. It was a treat. My daughter was 6 months old at the time I contracted it in November, and I wondered, "Are you more likely to develop mastitis when it's cold outside?" It was a bitterly cold fall that year, and I remember how badly it felt on my infected breasts.

According to the website for Kathleen Huggins R.N., M.S., International Board Certified Lactation Consultant (IBCLC), mastitis is most common during the cold weather months. This may be because of the binding, heavy nature of cold weather clothing on the sensitive breast tissue, according to Breastfeeding and Human Lactation, or it might simply be due to the cold weather itself which has a tendency to cause the small vessels in the breast to constrict, sometimes causing a vasospasm. According to Breastfeeding Medicine, nipple vasospasms, especially in the first eight weeks of nursing, can irritate and injure the breast and nipple and nipple injury can lead to bacteria in the ducts of the breast, causing mastitis.

I contacted certified lactation consultant, Angela Stoltzfuss, to find out why this phenomenon of mastitis and cold weather occurs, and if it's preventable. She tells Romper, "It's definitely a thing, and it's well documented. We're not completely certain why the correlation exists, but we do know that it does, and there are many treatments we can try before we go the route of antibiotics and other pharmacological interventions." She says that women aren't the only ones who deal with it either. Stoltzfuss, who lives on a large dairy farm near Amish country, says that cows deal with cold weather mastitis as well. I'm not certain if that makes me feel more guilty about my daughter's cheese addiction or not, but either way, science always looks for these animal/human similarities when considering if it's happenstance or cause and effect.

"It's important to keep your breasts warm and comfortable when you have mastitis, but not too tightly confined," Stoltzfuss adds. "You might consider using a night nursing bra for a period of time under a warm but not heavy sweater while you're treating your mastitis. Also, don't 'air out your nipples.' Even if it feels good temporarily, in the long run, the exposure to cold air is making the problem worse." She suggests taking some ibuprofen or acetaminophen to reduce the pain, and using warm compresses on the affected breast. "Whatever you do," Stoltzfuss says, "do not stop or decrease your breastfeeding. This only makes it worse. If you're fevered or if your milk supply begins to wane, you need to call your doctor, but in general it can be managed at home with little intervention."

When asked about the old wives' tale of cabbage leaves in the bra to relieve the pain, Stoltzfuss says, "I've seen where it can work, but I've also seen it dry up the milk faster. It also stinks, so, there's not a lot of motivation to use them." Plus, if you use purple cabbage, it will stain everything. I'm not saying I've done this, but I'm not not saying I've done this. Stoltzfuss reiterated to me that if you feel fevered or have any flu-like symptoms at all, you need to contact your doctor immediately. Even though mastitis isn't usually dangerous, it has the potential to become so if the disease escalates. Until then, warm compresses and maybe not cruciferous vegetables.