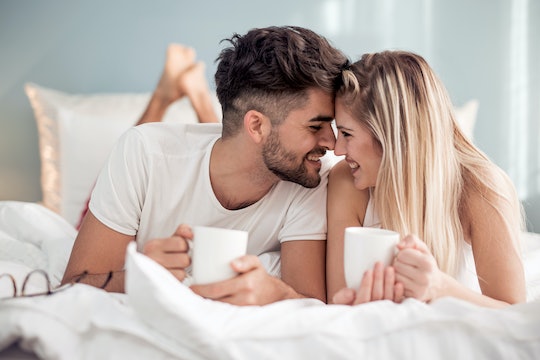 Trying to conceive (TTC) isn’t always as simple as merely having sex when you feel like it. For some women, yes, it happens that quickly. For others, it may take a bit longer and they may be wondering what they can do to speed up the process or up their chances of conception. There are a lot of myths about conception out there, like putting your legs above your head after sex, and the type of sex positions that work best when TTC. But what about time of day? Are you more likely to get pregnant in the morning?

While even though your partner’s sperm count is slightly higher in the morning, according to Dr. Jamil Abdur-Rahman, an OB-GYN and medical travel blogger along with his twin brother Idries for TwinDoctorsTV, “the increased likelihood of getting pregnant in the morning is minimal at best,” he says. This is because there are more factors that come into play than your partner’s sperm count. You have to worry about whether you’re ovulating or have ovulated in the last 12 to 24 hours. If there’s no viable egg, it doesn’t matter how awesome the sperm is — there’s nothing there to fertilize.

So when is the actual best time to get pregnant? Abdur-Rahman says it’s in the “two to three days leading up to ovulation, on the actual day of ovulation, and in the two to three days following ovulation.” A “normal” menstrual cycle for a woman is 28 days. “If a woman has a 28-day cycle, she will likely ovulate mid-cycle, or on cycle day 14, give or take a day or two. Once a woman ovulates, her egg remains viable for 12 to 24 hours. While an egg once released remains viable for 12 to 24 hours, sperm remains viable in the female reproductive tract for up to five days,” Abdur-Rahman explains. If you start having regular sex two to three days before you ovulate, he says your egg can be “greeted by sperm that was released up to five days prior to ovulation.

How do you know when you’re ovulating so you can time your sexcapades?Abdur-Rahman mentions three ways to tell. First and foremost, one of the most accurate ways to indicate you’re ovulating is by using an ovulation prediction kit (OPK). This can come in the form of wand (digital or not), like a pregnancy test, or even test strips, where you pee in a cup and stick the strip in there to tell. The test strips are a good option for those of you who are testing several times a day throughout your fertile period. They come in bulk, and usually even include pregnancy test strips as well. Making babies can get expensive after a while, so having this option in bulk is helpful.

Abdur-Rahman says another way to see if you’re ovulating is to check your basal body temperature (BBT), which you need to test as soon as you wake up in the morning, before you move at all, for accurate results. “A woman's temperature will normally increase by 0.2 to 0.4 degrees Fahrenheit on the day that she ovulates. So, if a woman checks her temperature daily, she will be able to determine when she has ovulated by documenting an increase of 0.2 to 0.4 degrees Fahrenheit,” he explains. He also suggests checking your cervical mucus (CM). “An estrogen peak leading up to ovulation causes cervical mucus to become more copious and thin. So frequently, a woman can tell that she has ovulated when her cervical mucus production increases."

While the time of day you have sex doesn’t really matter when it comes to the likelihood of you getting pregnant faster, what does matter is if you’re ovulating or have ovulated. If you’re ovulated or have already ovulated and you and your partner can hit the sheets before work, that may be the perfect storm because his sperm should be more copious. However, just having sex in the morning, without ovulating, won’t increase your likelihood of becoming pregnant. Good luck and happy ovulation tracking.