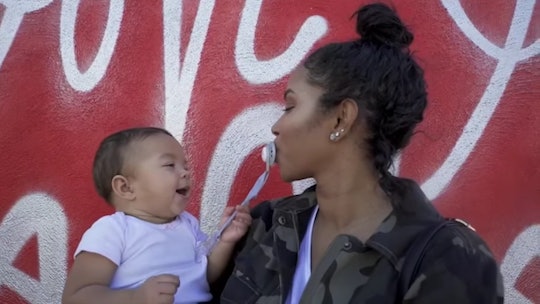 MTV's long-standing reality show, Teen Mom OG, announced a pretty big casting shakeup earlier this year when mom-of-three Bristol Palin confirmed she was joining lineup, but it turns out that wasn't the only surprising change the network had in store. On Thursday, Us Weekly exclusively confirmed that MTV alum Cheyenne Floyd is Teen Mom OG's newest cast member, despite also not actually being part of the original show that inspired the series, 16 and Pregnant.

In fact, technically Floyd wasn't even a teen mom: the 25-year-old's daughter, Ryder, is only 16 months old. But her road to motherhood has a significant connection to the network — Floyd met Ryder's father, Cory Wharton, when they were both competing on The Challenge: Rivals III, and she was also on the MTV dating show, Are You the One?. Couple that with the seemingly-complicated circumstances surrounding Floyd's pregnancy (Wharton didn't learn about Ryder until she was 6 months old), and Floyd's casting doesn't seem quite as unusual (especially since it sounds like she'll have *a lot* to share with fans and viewers).

These days, Floyd is raising Ryder as a single parent, and though she's already built up a following on social media thanks to her YouTube channel, Raising Ryder, she told Us Weekly that joining Teen Mom OG means she and Wharton — who is also joining the show — are "finally going to be able to tell [their] story and how Ryder got here."

Floyd's storyline won't only be focused on whatever potential drama that may have gone down between her and Wharton though. She'll also be opening up about her daughter's VLCAD deficiency, a genetic condition which, according to the United States National Library of Medicine, "prevents the body from converting certain fats to energy." Floyd previously addressed Ryder's health in a video on her YouTube channel, explaining that she learned soon after her daughter's birth that she had the condition, and that it was understandably upsetting and scary.

Floyd said that while she was "still learning new things about [VLCAD] everyday," and that it was "something [she] wasn't expecting" and hadn't even heard about prior to giving birth. But while it currently means that her daughter has to eat every three hours and take medicine, she noted that overall, Ryder is doing really well.

In addition to being a way to share more of her personal story as a mom though, it sounds like Floyd has an even bigger goal for her Teen Mom OG appearance: in her YouTube video, she explained she wanted to continue to talk about VLCAD to raise awareness and ensure that Ryder's condition isn't something "[she's] ever ashamed of having." Floyd also told Us Weekly that she's starting a non-profit organization dedicated to the condition ‚ and having a platform as significant as being on Teen Mom definitely seems like it could be a really valuable boost for her health advocacy work.

For now though, Floyd seems to be keeping her other social media accounts under wraps — although Wharton is on Twitter as @MTVCoryWharton, Floyd doesn't yet appear to have an account, and her Instagram page is currently set to private (as is the account she created for Ryder). But now that the news of her casting has been made official, it seems reasonable to think she'll soon be back, and maybe even sharing glimpses of the filming process, as Palin did on her own Instagram account earlier this year.

As psyched as her followers may be to see her join Catelynn Lowell, Maci Bookout, and Amber Portwood on the show though, the girls themselves might not quite be as thrilled. In a recent interview with Teen Mom 2's Kailyn Lowry for her podcast, Coffee Convos, Lowell revealed that MTV never told her about Palin's casting prior to the public announcement, and that she felt it wasn't cool of the network to keep her and the other moms in the dark. So while there's no word yet on their feelings about the newest Teen Mom OG addition, here's hoping MTV execs at least decided to give Lowell and her cast mates a courtesy call this time around.