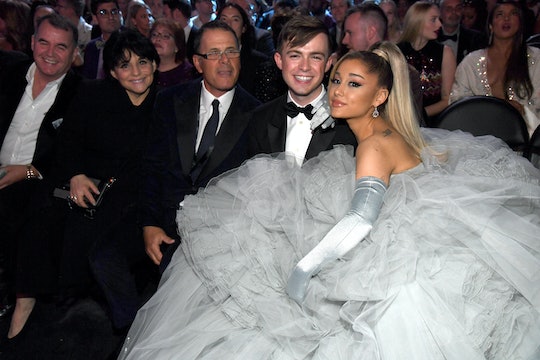 Ariana Grande Honored Her Dad With A Sweet Change To Her "Thank U, Next" Lyrics

During her performance at the 2020 Grammy Awards, Ariana Grande changed her "thank u, next" lyrics to reflect changes in her life. The lyric change was specifically about both of her parents who were sitting in the audience. People watching at home took note, especially when it appeared that Grande had gotten emotional during the performance.

Grande opted to perform a medley of songs from thank u, next at the Grammys, with the album nominated for both Album Of The Year and Best Pop Vocal Album Of The Year at the Grammys. Grande led audience members through samples of the songs "imagine," "My Favorite Things," from The Sound of Music, and "7 rings," which is a take on "My Favorite Things." But Grande ended with "thank u, next" — the song in which she declares that she is happy with the lessons that she has learned in life.

In the song, Grande normally sings "one day I'll walk down the aisle, holding hands with my mama, I'll be thanking my dad, 'cause she grew from the drama."

At the Grammys, Grande changed the lyrics to "I'll be thanking my dad, 'cause he's really awesome."

This was even more special since Grande's parents — dad, Edward Butera, and mom, Joan Grande — were sitting in the audience and watching her perform. They had accompanied her on the red carpet as her dates earlier in the evening and looked so happy to be there with her.

A lot has changed in the year and two months since thank u, next was released. Grande spent Thanksgiving with both of her parents for the first time in 18 years in 2019 after they divorced when she was 8.

But even Grande was able to note these major changes in her life. As she explained in a tweet when "thank u, next" turned a year old in November, "I can't believe I've spent more time alone this year than I have in my life, I can't believe how many sessions with my therapist I've had, how many times I've sung this song, how much I've learned and healed, how much I still have to learn and heal!"