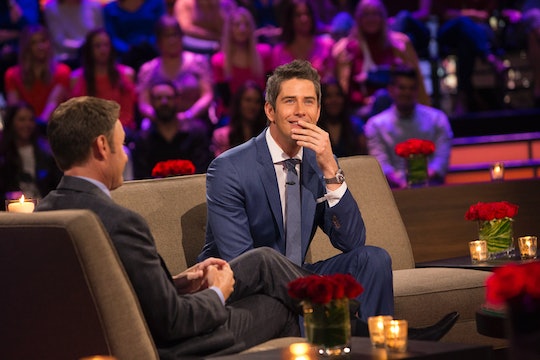 The moment we've arguably been waiting for all season finally arrived during the fantasy suites episode of The Bachelor, when the mystery guy who crashes the show to win back his ex was revealed. It turned out to be Becca's ex, Ross, who has dated her on and off for several years. He flew all the way to Peru to confront Arie before he went and spoke to Becca, and Arie's comments about Becca's ex on The Bachelor may be the only solid joke he landed all season.

Ross showed up the morning after Becca got back from her overnight date with Arie. After explaining to producers who he was, why he was there, and how he supposedly didn't know "there was a proposal at the end of all this" (um, sure, dude), he knocked on Arie's door. Why he wouldn't go directly to Becca speaks volumes about how territorial this guy is, and makes it pretty obvious that he was only there to size up someone whom he perceived to be his competition. For his part, Arie handled it pretty gracefully, but in a cutaway interview, he landed the single sickest burn of the season. Explaining how confused he felt when Ross first knocked on his door wearing a pretty dressy-looking tan suit, Arie said, "At first, I was like, 'Why is hotel management here?'" Twitter lit up.

Obviously, Ross eventually revealed his identity to Arie and he understood what was going on. Well, sort of. Arie definitely didn't understand why someone would sleuth out the show's super secret filming location and travel all the way to Peru to "win back" someone they broke up with a year ago and haven't spoken to for months — especially when the relationship was so obviously fraught. But, girl, Ross tried it.

Arie didn't seem too worried as Ross went off to talk to Becca, and she was definitely stunned and frustrated when her ex showed up. She (accurately) told him that it was ridiculous to assume everything would be "like The Notebook" and that one ill-conceived grand gesture from him would derail the relationship she had carefully been building. Becca shared details of him on the show before, and it's clear that they had a deep history which shaped her as a person in relationships. But that doesn't mean her past had any right to crash her present.

Becca and Arie discussed this particular ex at the very first cocktail party on night one. She told him her last relationship, which was on-again-off-again, lasted for seven years. She's also spoken about Ross being the person who helped her process her father's death, which is obviously a significant bond the two share. But Becca also mentioned that her uncle didn't like her ex and that he'd always had a bad feeling about him. In Peru, on their fantasy suite date, Becca and Arie discussed how they'd manage a long-distance relationship until one of them (presumably Becca) would relocate. She brought Ross up again, saying that in a past long-distance relationship, she did all the traveling, while her partner didn't put in as much effort.

Ultimately, it seems like Ross was a really important figure in Becca's life who informed how she approaches dating. That's a valuable connection to have made, but the fact that the couple couldn't make it work in seven years of trying sort of puts the writing on the wall. In the end, Becca sent Ross away and smoothed things over with Arie, and Arie seemed to trust her judgment. She got a rose this week, along with Lauren and will battle it out next week in the finale for the final rose. Stay tuned to find out who walks away engaged.