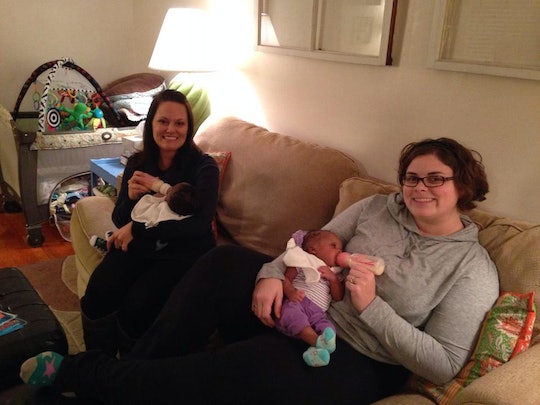 As An Adoptive Parent I Didn’t Breastfeed, & I Have So Much Respect For You

As a kid, I more often made my Barbies adopt than I stuffed tissues up their dresses to make them pregnant. As a teen, I didn’t get why everyone sobbed watching TLC’s A Baby Story until I watched the episode where the family meets their baby in the airport as she arrives from China.That time I lost it sobbing in our rec room until I could barely breathe. It came as no surprise to anyone, then, that we built our family through adoption. After a brief struggle with infertility that I walked away from without pursuing treatment, we jumped headlong into the adoption process. Three years after starting the paperwork, and three kids later, I was a pro at mixing a bottle with one hand while balancing my twins on the other arm and talking my 2-year-old off the coffee table at the same time. While some adoptive parents do induce lactation, that path wasn’t for me.

More Like This
Um, "Rusty Pipe Syndrome" Is A Thing, & Every Breastfeeding Mom Should Know About It
Here's The Deal With Babies Who Sleep With Their Eyes Half Open
Experts Offer Tips On How To Wean — Whenever You’re Ready
18 Best Sand Toys In 2021 For Babies, Toddlers, & Kids

I was and am a proud formula feeder, who never for a minute has had any anxiety about how my kids will turn out due to how they were fed. I never longed for nursing, I never grieved not being pregnant. I know that God created me to be a mom, but just not to grow babies. Frankly, sometimes I felt very bad for my friends who couldn’t meet me for a glass of wine because they couldn’t just hand baby and a can of Similac to their partner as they flounced out the door. I enjoyed the very equal role that bottle feeding gave my husband and I. The checkout lady who shamed me as I bought formula got an earful from me, and never looked at me the same way again as I weekly checked out with my cart of little blue canisters.

Right around the time I was weaning my twins off of formula, both my sister-in-law and my best friend of 30 years gave birth to their first babies. My first niece and pseudo-nephew entered the world, and I was so delighted in their presence. I had many friends who were nursing moms, of course, though my social circle was mostly made up of other adoptive moms I had met through agency events. Nursing was not something I thought much about, to be honest. Until these two little souls entered the world.

I talked mostly to other formula-feeding moms as we grew in defensiveness about our choice, or their perceived failure to nurse their children.

Watching these two dear women in my life learn and grow as new mothers absolutely changed my view of breastfeeding. On top of the sleepless nights, the adjustment to staying at home with a child instead of working at a career they loved, and the physical recovery from labor, they were also learning how to completely sustain another human. Where my husband and I developed a night-time bottle rotation so we each got a good run of sleep, they were doing that solo. With support and love from their husbands, of course — but not actual hands-on help or splitting of duties. Mastitis, latch issues, learning to feel comfortable nursing in public… there were so many adjustments to their new role as mom.

For a while, as I navigated new motherhood, I talked mostly to other formula-feeding moms as we grew in defensiveness about our choice, or their perceived failure to nurse their children. I saw moms sink into depression over their lack of success at breastfeeding, and it worried me. As time went on, though, I began to realize how much more of a broader theme of parenting there was, beyond which camp we had landed ourselves in. Watching those closest to me on their breastfeeding journey was an amazing education for me. My nursing moms wondered daily if they were doing a good job, being a good mom, keeping up, making the right choices. The same as me. They also worried about supply, their rights to nurse their children in public spaces, what went into their bodies and thus their milk, and so many more issues.

I became so proud of these women and the awesome and, at times, completely overwhelming task they were taking on. They were entirely sustaining another human. That is just amazing, period. Despite the fact that I could go out for dinner and leave daddy with the bottles, I could just as easily go over their house and watch The Bachelor so they didn’t have to worry about rushing home in a two-hour window or pumping in some awkwardly designed public space. Rather than being unsure or nervous about my lack of understanding of “nursing in public etiquette” (because every friend has a different idea of what feels right for them), I could sit by them while they fed their baby in the library and give the stink eye to anyone who shot dirty looks their direction.

So for World Breastfeeding Week, I celebrate you, my amazing breastfeeding loved ones. I applaud your effort and dedication to your babies, I am thankful that you were able to complete the journey that mattered so much to you. I may not always fully “get it” as someone who hasn’t experienced it, but I can promise to always be there to ward off grumpy naysayers. I promise to always lend you the cami under my shirt when yours is soaked through. And I promise to do my best to support the decisions you make for your family, just as you’ve always done for me. Love you ladies.