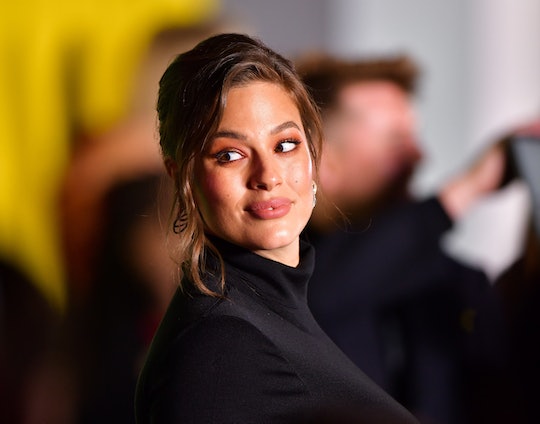 With the most infectious excitement a mom-to-be can exude, model Ashley Graham revealed the sex of her baby during an adorable interview with Ellen DeGeneres. The Sports Illustrated model sat down with the talkshow host for a lightning round of Q&A when she blurted out the happy news.

During her appearance, DeGeneres started by asking Graham some quick questions, like "Who (other than your husband) do you have a crush on?" Graham quickly answered: "Steve Carell, humor gets me every time." She went on to ask if she had any secrets from her mom (apparently not), most embarrassing wardrobe malfunction (split pants), and of course, "Are you having a boy or a girl?"

If you've been following Graham on Instagram since she first announced her pregnancy, then you know it's been a fun and wild ride to witness, just like her sex reveal on Thursday. Back in August, she and her husband of nine years, filmmaker Justin Ervin, announced they were expecting their first child with an adorable post on Instagram, "Today, we are feeling so blessed, grateful and excited to celebrate with our GROWING FAMILY."

Since then, Graham has been delighting her followers with glamorous bump selfies and empowering words about learning to love her changing body on social media.

Graham is clearly super excited about becoming the "mom of a boy," and the date for her little boy's arrival is rapidly closing. She told DeGeneres at the beginning of their interview that her due date is some time in January, although she didn't get too specific since her doctors told her she "could be early or could be late." Every woman who has given birth is nodding along to that familiar old yarn, I think.

Of course it's perfectly possible Graham was struggling to remember the exact date since she admitted to DeGeneres that she has "pregnancy brain" and recently forgot her phone number and accidentally had photos of her sent to the wrong number; "And someone sent back a thumbs up and it wasn’t me. So there’s photos of me out and about in the world. At least I’m covered.”

Pregnancy brain is absolutely a thing and don't ever forget it. Or if you currently have it, you might have already forgotten.

As someone who is already a boy mom four times over, I could tell Ashley Graham she has a whole lot to be excited about. The American Beauty Star host is already so full of joyful energy that trying to chase a little boy around should be right up her alley. Or she could have a super quiet son and hey, truly there would be nothing wrong with that. The reality is that Graham and Ervin's lives as expectant parents are all about possibilities, about the road to come and carving their own paths as a family.

Ashley Graham is up for the challenge. She's ready to be a "boy mom."

More Like This
Sarah Levy Revealed She's Pregnant & Got A Very Schitt's Creek Response From Brother Dan
Diane Kruger Revealed Her Daughter's Name (& Its Meaning) 3 Years After She Was Born
Ashley Graham On The “Fun, Organized Chaos” Of Raising Twins
Ashley Graham Shared A Sweet & Honest Look At How She Tandem Breastfeeds Her Twins