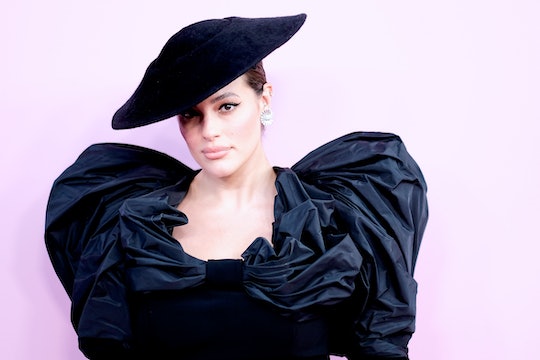 Pregnancy suits Ashley Graham so well. The model is glowing in every single photo that has been taken of her since announcing her pregnancy at the beginning of August. And you can't blame her. Judging by all of Ashley Graham's pregnancy updates so far, she seems to be loving all that comes with being pregnant, which is awesome.

Graham has only been publicly pregnant for a little over a month, and has shared so much with her followers in the time since then. On Aug. 14 (which is the same day as their wedding anniversary), Graham and her husband, Justin Ervin, took to Instagram to announce that they are expecting their first child together, according to Good Morning America. In the post, Graham was already shouting the praises of pregnancy. "Today, we are feeling so blessed, grateful, and excited to celebrate with our GROWING FAMILY," she wrote in the caption.

In the days since then, Graham's excitement for her pregnancy has only grown. She's been so open and honest with her Instagram followers about how her pregnancy has been affecting her. Although Graham's due date is a little unclear (it's likely that she will be due some time this winter), she's embracing every last day and moment that she has with her bump.

The following updates prove just how much she's loving it all.

Graham is experiencing all that comes with pregnancy, including the cravings. In early September, she took to Instagram to share that she experiencing pretty much all of the cravings — from some healthy food to some sweet treats, that she communicated through emoji. Graham wrote that she's been craving salad, corn, cucumber, strawberries, and cantaloupe, in addition to coffee and doughnuts. "Feed me all the cravings, literally every emoji except cantaloupe!," she wrote in the caption of the post.

Although Graham has been enjoying her pregnancy, she has had her fair share of struggles, too. In early September, Graham took to her Instagram account where she recorded a video of her ranting about her struggle with leggings while having a pregnancy bump. "Need pregnancy workout pants that go above my belly and are durable!!," Graham wrote. Luckily, her followers were able to come through with some very helpful suggestions in the comments.

She has also experienced a healthy dose of pregnancy brain, too. Graham took to Instagram to share that she has been just a little disoriented (and sleepy) during this pregnancy, which is allowing her to have free reign to do whatever she wants. "I'm so tired from this week I honestly thought it was Monday!!," she wrote. "Tomorrow I will binge watching 90 Day Fiancé and ordering whatever the heck I want to eat!"

For every low that she has experienced, she's also had a lot of highs, too. During New York Fashion Week in September, Graham (and her bump) walked the runway in the Tommy Hilfiger and Zendaya fashion show, according to Page Six, which was an honor to Graham. She wrote about how great this made her feel in a post on Instagram. "Thank you for honoring the importance of inclusion by representing so many different women on your runway and showing that beauty comes in all forms," she wrote in the caption. "I could have never imagined the feeling of walking a runway pregnant, it was truly an honor for us to be there!"

You can't blame Graham for wanting to relax, especially since she has been working so hard and dealing with her fair share of stressors. So, Graham has been doing just that — taking the time to lay by the pool, get a massage, and enjoy her life with her bump.

Although Graham has not updated her fans about the size of her bump or how many weeks along she is, these updates show that she is loving pregnancy every single step of the way.