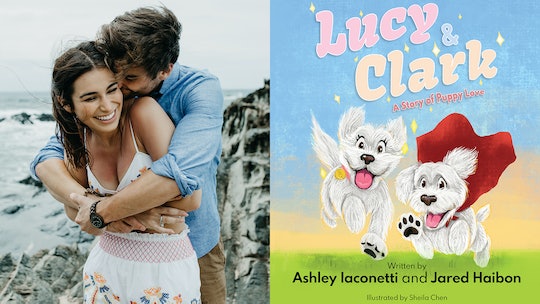 Yup, You're Going to Fall In Love With Ashley I & Jared’s New Children’s Book

Ashley Iaconetti and Jared Haibon's love story is anything but ordinary. After four years of teasing "will they or won't they" on the Bachelor franchise, the couple announced their engagement on Bachelor in Paradise Season 5. Now, the fan-favorite power couple has one more surprise for Bachelor Nation before they tie the knot — and it's going to be one you can share with your kids. On Mar. 26, Ashley I. and Jared are releasing a children's book called Lucy & Clark: The Story of Puppy Love. And yes, it's just as adorable as you might expect.

While Ashley I. and Jared's venture into children's literature might come as a surprise to fans of Bachelor Nation — especially those of us dying for a Bachelor tell all — the pair revealed they they joked about retelling their love story through their dogs, Lucy and Clark, prior to their engagement on Bachelor in Paradise. As fate would have it, the couple would move on to do just that.

"The best part of writing the book together was that we came up with an idea, just the two of us, and we were able to see it come into fruition," Ashley I. and Jared tell Romper in a joint statement. "So excited to finally be able to share it with everyone!"

In a press release on Tuesday, Jared explained that while readers will find similarities between the book and the couple's story, there are also notable themes and major life lessons kids — and adults — can take away from Lucy & Clark.

Ashley and I are loosely represented through Lucy & Clark. It’s a story about overcoming your fears and the beauty of getting out of your comfort zone. I had to do both of these to be in the relationship we are in today, and once I did, I became the happiest version of myself. I no longer lived life in my shell. This lesson doesn’t just apply in love. We wanted to write a book to help kids feel less anxious about making new friends and feel braver about exiting their comfort zone.

Jared went on to point out that their goal is to help kids on the shyer side to feel more confident in themselves.

We want kids to feel a little more comfortable trying to make friends. As a kid, I had difficulty making friends because I was too shy. When I was a kid, I remember playing by myself at the playground during recess because I didn’t know anyone and was too nervous to introduce myself. Ashley was the complete opposite—like Lucy, she was a chatter box since age three. We hope kids who are a little more like me read this book and come out of it a little more courageous.

That being said, the couple didn't forget about their Bachelor Nation fans and included a few Easter eggs — there are a few characters in Lucy & Clark that might feel familiar.

"There’s a couple more Bachelor members in this book if you look closely," Jared revealed. "We hope people like this book enough for us to put out another one, because we definitely have some more ideas! We love personalizing our work, so I’m sure we’d include Bachelor family friends in our next project."

Lucy & Clark: The Story of Puppy Love is available online now and available everywhere books are sold on Mar. 26.