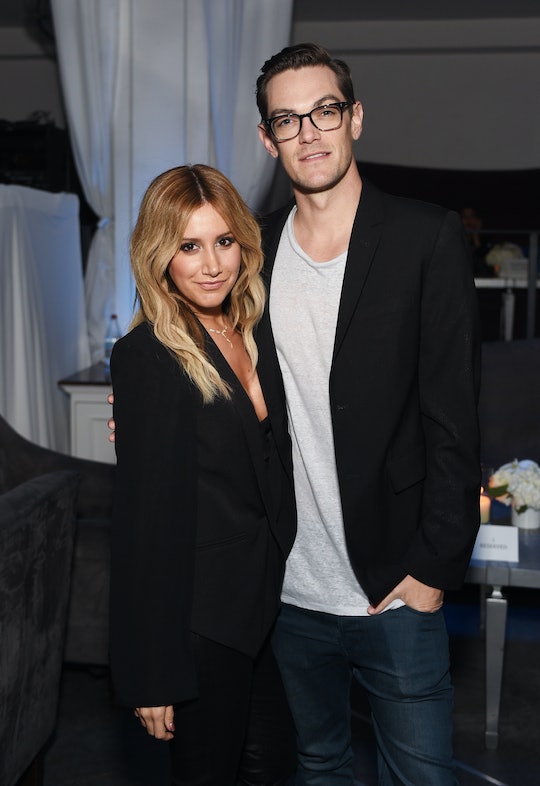 Wildly dramatic Sharpay Evans from High School Musical might not approve of their toned-down version, but when Ashley Tisdale and her husband Christopher French revealed the sex of their baby, they decided to err on the side of caution. And the results were safe, sweet, and, of course, oh-so-exciting.

The couple, who have been married for six years, initially announced they were expecting their first child together in September with an Instagram post and simple bump photo. And with the next piece of exciting news, Tisdale and French also shared a few photos from their backyard sex reveal that included a delicious cake. The couple chose to go for something simple, perhaps in light of the fireworks sex reveal party that inadvertently started a wildfire in California that spread over 7,000 acres of forest in September.

"This year has obviously been hard. For so many. Ups and downs, and an emotional roller coaster. I think this day was by far my favorite day EVER! I cried I was so happy," Tisdale wrote on Instagram. "Ps for all you people going above and beyond for gender reveal parties. A cake with the color inside is JUST as rewarding as fireworks but SAFER!"

In a series of photos, the couple revealed a pink cake — they're having a baby girl!

Back on Oct. 2, when the couple initially had their sex reveal, Tisdale wasn't sure if she was going to share the news with fans because, as she wrote on Instagram, "I like to keep as much as I can close to my heart." But after fans commented that they would love to find out her baby's sex, she decided to share the news. And good thing she did because now fans know there is going to be a baby Sharpay in the world.

A socially conscious baby Sharpay at that. Prior to her sex reveal, Tisdale shared a post on Oct. 6 endorsing the Biden/Harris presidential campaign. "#iamvotingfor my baby!" she wrote on Instagram. "I want a president that believes in the science of climate change so they can have a future and a world to grow up in." A world where sex reveals can happen with just some cake in the backyard and be just as satisfying.