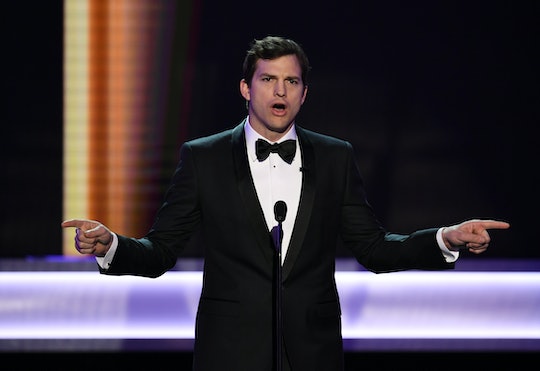 Ashton Kutcher Made 'Paw Patrol' Pancakes For His Daughter, & Well... She Was Not Impressed

Jimmy Kimmel might have some competition when it comes to being the best pancake maker for his kids. Well, maybe. This week, Ashton Kutcher made Paw Patrol pancakes for his daughter and they turned out, well, not great. To be completely fair, though, the Paw Patrol pancake looked pretty tough to put together, what with all the different sizes and shapes needed to make the ears and nose and adorable puppy eyes. It's just... I've seen better. Not that I could do better, but if you're going to Instagram something, you might as well make it perfect. Kutcher's daughter apparently felt the same way.

Kutcher captioned the image of his masterpiece on Instagram, "Was trying for a skye from #pawpatrol pancake. My daughter, 'what’s this suppose to be?' #humbled." If you're a grown-up and have some height on the thing, you can definitely see what he was going for. The edges are a little burnt and the eyes don't match, but I can see it.

Like I said, I can barely fry an egg let alone try my hand at pancake art, so I'm impressed. However, with Kimmel around using food coloring and everything, poor Kutcher is going to have to up his pancake game in a major way.

And Some Of Kimmel's Best Work

It's obvious who the winner is. Maybe Kimmel could have Kutcher on his show for a demo or something so his daughter doesn't grow up so deprived. (I'm kidding, of course. Any kid who has a parent that will make pancakes now and again is pretty lucky.) Kutcher has two kids, 1-year-old Dimitri and 3-year-old Wyatt with his wife, Mila Kunis.

Kunis and Kutcher once told Entertainment Weekly that they don't intend to raise picky eaters or spoiled kids, despite the fact that they're growing up in a celebrity household. She told the outlet last fall:

Yeah, we’re not gonna raise a–holes. There’s enough a–holes in this world! We don’t need to contribute. But, you know, there’s some nice people.

I think the way Wyatt handled her father's pancake foul was very polite, don't you? Kind of like when you ask a toddler to explain their art to you. Both Kutcher and Kunis keep busy, and they've worked hard to find balance between their kids and careers, according to the Bad Moms star. She previously told Entertainment Tonight that she struggled with knowing whether or not she should feel guilty about getting nannies before their second baby. Kunis said:

I’m a little bit less stressed over what to anticipate [with two kids]. You’re still stressed out and there’s still the idea of the guilt of leaving your kids, but you know that they’ll be okay. Because I’ve already done it once and the kid doesn’t resent me, so I was like, "Okay, I think I can do this." I also need to enlist help. Working full time, my husband has moved his company here, so he works full time. We needed help.

But they're both hands-on parents. Kunis said of her husband in an interview with The Telegraph that Kutcher wanted to be the designated diaper changer, which was obviously fine with her.

"My husband is an incredibly hands-on dad. When my child was born, I was breastfeeding and he said, 'That's your connection, I want to change every diaper.'" Because of that duty, he immediately understood how unfair it was that there weren't diaper changing tables in the men's room and has since become an advocate for getting changing tables in all bathrooms.

He started a petition for all public places and stores to put them in. Kutcher wrote in his website, A Plus, at the time:

I would like my daughter to experience a world where gender doesn't dictate one's responsibility or limit one's opportunity. Having changing tables in men's rooms is just a tiny step in the process of rectifying legacy gender discrimination. Men who are aware of this bias want to participate equally in the child care process and our society should support that. It's time to get our hands dirty.