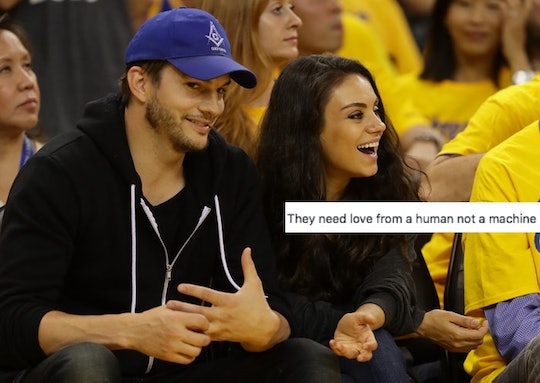 For 10 years of my life, I didn't sleep. None of my four sons slept, and the only thing that seemed to soothe them as toddlers was the knowledge that I was not sleeping either. Here is what I would have done to get some sleep — anything. The list is long and short at the same time. I missed sleep like a beloved relative who died. This is the way it is with parents of babies. So when I found out that Ashton Kutcher and Mila Kunis were shamed for using a "robo-crib" to get their baby to sleep, I might have suffered from a little post-traumatic stress disorder. Because no parent should be shamed for trying to sleep, trust me.

Kutcher and Kunis are the parents of 3-year-old daughter Wyatt and 1-year-old son Dimitri. And they really want to get some shut-eye, like all parents of small children, famous or otherwise. So during a recent episode of Dax Shepard's podcast Armchair Expert, Kutcher opened up about a crib that apparently helped the couple get their baby to sleep.

As The Independent reported, it's the SNOO Smart Sleeper, a responsive bassinet that responds to a baby's fussing with "gentle womb rhythms" that are meant to soothe a fussy baby in under a minute, according to the product's description. So basically, it sounds like the best crib ever.

After struggling to get daughter Wyatt to sleep, The Ranch actor told Shepard that he and Kunis were anxious to get ahead of the sleep issue the second time around:

For kid number two we got one of those Snoos. It’s an oscillating bed… it has a sensor in it so the louder the kid cries, the faster it goes and puts the kid back to sleep, it’s incredible.

He went on to tell Shepard that the crib was responsible for helping baby Dimitri sleep for six hours in a row on his third day of living on earth. "I’m eternally grateful to the Snoo for that," he said on the podcast.

Except not everyone agrees that this seems like a pretty perfect win-win for all involved. When the parent company that makes the SNOO Sleeper, Happiest Baby, caught wind of Kutcher's seemingly unprompted recommendation, they were justifiably excited. Because how often is it that a celebrity endorses your product without payment? Unfortunately some naysayers caught wind of the news that the tired parents were using the high-tech crib and started to weigh in on the apparently controversial bassinet.

"You can't rock your own baby to sleep? Sad state of affairs. I'm sure these kids will have all the iPads and laptops to entertain them too," one reader commented on Yahoo!'s article.

Another wrote, "How pathetic that he was so happy to have the baby sleep a full six hours at only THREE DAYS OLD. Are you that big of a snowflake to not get up with the kid every few hours?"

"They need love from a human not a machine," another commented on Facebook.

Yet another chimed in on Facebook, "Awe poor guys... they don’t work 9-5’s like most of us, and they still complain about lack of sleep."

Fortunately, there were plenty of parents who leaped to their defense. Even those who admitted they probably couldn't afford the price tag of the SNOO Sleeper, which sells for around $1,100, admitted they would pretty much try anything to get their baby to sleep and didn't fault Kutcher and Kunis for doing the same.

People also wrote on the Happiest Baby Instagram account, with one commenting, "Can’t argue with Ashton!" Another wrote, "Oh yay! What a great statement to your Snoo❤️"

Here's the thing: celebrity or not, everyone needs proper sleep to function. Whether you're a baby or a parent. So if Kutcher and Kunis managed to keep their baby happy with a high-tech, expensive crib, good on them. To assume that they are replacing hugs and cuddles with a crib is not only presumptuous, but ridiculous.

If I thought they made the SNOO Sleeper in adult size, I would cough up some serious coin for one right now. Because sleep is the best.