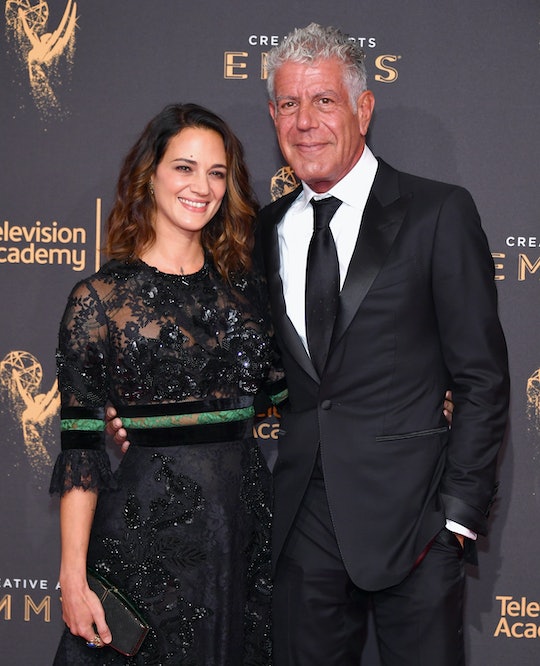 On Friday morning, news broke that chef and television host Anthony Bourdain had died at the age of 61, according to CNN. Many fans and peers of the iconic chef took to social media to share their devastation, including Bourdain's partner, Asia Argento. And Asia Argento's statement following Anthony Bourdain's death is a heartbreaking tribute to a daring man who inspired foodies and non-foodies alike for decades. Romper's request for comment from Bourdain's representative was not immediately returned.

Argento took to Twitter Friday morning to speak out following Bourdain's death, writing in a post, "Anthony gave all of himself in everything that he did. His brilliant, fearless spirit touched and inspired so many, and his generosity knew no bounds. He was my love, my rock, my protector. I am beyond devastated. My thoughts are with his family. I would ask that you respect their privacy and mine."

The New York Times reported that Bourdain, who hosted CNN's Parts Unknown, had died by suicide. At the time of his death, the bestselling author and iconic chef was in Kaysersberg, France, near the town of Strasbourg, where he was filming an upcoming episode for his award-winning travel food series, according to The Times.

CNN had also released a statement early Friday morning confirming Bourdain's death "with extraordinary sadness." The network continued in the statement, which it posted to its communications account on Twitter:

His love of great adventure, new friends, fine food and drink and the remarkable stories of the world made him a unique storyteller. His talents never ceased to amaze us and we will miss him very much. Our thoughts and prayers are with his daughter and family at this incredibly difficult time.

The globe-trotting Bourdain was a prolific chef deeply committed to food advocacy and promoting diverse cuisines from around the world. In addition to Parts Unknown, Bourdain also hosted Travel Channel's wildly popular series No Reservations, as well as its spin-off, The Layover. In all of his shows, Bourdain took care to highlight those food cultures that are often appropriated by privileged chefs. He also frequently spoke out about the inequalities faced by people of color in the culinary world, according to Remezcla.

Bourdain's peers, friends, fans, and admirers took to social media to express their heartfelt condolences and the ways in which he inspired them. Chef and television host Gordon Ramsay, President Barack Obama, astrophyisicist Neil deGrasse Tyson, celebrity chef and model Chrissy Teigen, and chef Jamie Oliver were among the chorus of voices that flooded Twitter after the news of Bourdain's death, paying tribute to the late chef.

Bourdain, who published several books, including the New York Times' best-seller, Kitchen Confidential, rose to fame because of the bold risks he took not only as a chef, but as a personality. The New York native never shied away from talking about the good and bad parts of his past, and was outspoken about his opinions — not only of others, but of himself.

He also recently became a vocal advocate against sexual harassment in the food and entertainment industries. Most notably, Bourdain spoke out against Harvey Weinstein and those who made light of the sexual misconduct allegations levied against the disgraced Hollywood executive. He also publicly supported Argento after her sexual abuse allegations against Weinstein came to light, according to The New York Daily News.

Bourdain was a beloved chef who touched so many lives with his innovation, humor, honesty, and raw persona. His influence in the culinary world is beyond measure, and he will be deeply missed by millions of people from around the world.