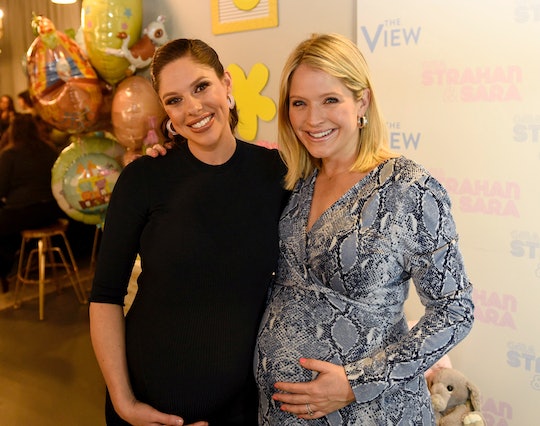 A baby shower isn't the first place you'd anticipate having a discussion about postpartum depression, but that's what happened when I attended a joint celebration for Sara Haines and Abby Huntsman this week after a taping of The View.

Haines, cohost of Strahan and Sara, is pregnant with her third child, and Huntsman, one of the hosts of The View, has twins on the way — both are interested in sharing what they've learned along the way. So when I gathered with a few others to celebrate the duo's upcoming births, party games quickly turned into a conversation on perinatal mood or anxiety disorders (PMADs), with both moms taking the opportunity to share their own experiences.

The gap between these inaccurate stereotypes and the ways mental health conditions actually manifest for pregnant and postpartum women is part of the reason mental health professionals have moved toward using the inclusive language of "perinatal mood and anxiety disorders," which encompass both the pregnancy and postpartum phases, and recognize that some women experience anxious or obsessive elements, rather than depressive symptoms. At their baby shower, Haines and Huntsman were determined to shed light on the lived experience.

Many new mothers, Haines included, experience intrusive thoughts, which can be upsetting but are unlikely to be acted upon, per the Motherhood Center of New York City (postpartum psychosis is extremely rare, affecting 0.1 to 0.2 percent of new moms, according to Postpartum Support International).

So mothers with complex emotions before and after birth are in good company.

Perinatal depression impacts up to one in seven women, a U.S. Preventive Services Task Force reported in a 2019 paper published in JAMA, but the number of moms who actually get the help they need is much lower. In fact, half of women who suffer from perinatal depression go undiagnosed according to the findings published in a January 2019 Pediatrics study. This is partly because they don't identify with media depictions of the condition, and partly because there is a stigma around mental health issues. Haines and Huntsman want to help address both of those barriers to moms seeking help when they need it.

For Huntsman, the worst part was feeling like she couldn't tell anyone. 'You're ashamed, almost,' she says.

The disconnect between extreme media depictions of those who have postpartum anxiety or depression and the more subtle reality led to Haines' confusion when she didn't feel the new mom joy but still felt love for her child. "I just thought the baby would be better off without me," Haines explains through tears, seeing herself as unprepared and ill-equipped for motherhood.

She remembers thinking, "Am I broken?" in the weeks following her son's birth, unsure how to come to terms with the feelings she didn't expect.

Huntsman had a similar struggle after the birth of her daughter, Isabel. She spoke of crying with her husband in their kitchen after they put the baby to sleep one night, telling him, "I'm not me right now" and sharing with him her experience of "feeling helpless."

For Huntsman, the worst part was feeling like she couldn't tell anyone. "You're ashamed, almost," she says, as she feared admitting her less than happy emotions would make people think she was a bad mother.

She is proof that the stigma remains.

When people with PMADs don't say anything about their struggles, those who come after them miss out on the opportunity to learn from their experience — to prepare to experience a range of emotions. And prevention is one of the best ways to prevent and treat PMADs: counseling of women at high risk of developing perinatal depression saw them 39 percent less likely to actually become depressed," per the preventative services task force.

Haines and Huntsman aim to help with prevention by talking about their own experiences, hoping they can use their platforms to normalize PMADs for other moms.

Haines sees the issue as a personal crusade of sorts, telling me she warns every pregnant woman she meets about the trials so many don't discuss. Huntsman feels similarly: "A lot of women don't have the help that we're fortunate enough to have," she says, explaining her desire to share her story.

More Like This
Breaking Down The Different Types Of Postpartum Infections
These 4 Sleeping Positions Will Keep You Comfortable After A C-Section
Here's The Best Time To Remove Your C-Section Tape
Advice For Rihanna On Having A Baby In This Country, From One Black Mom To Another