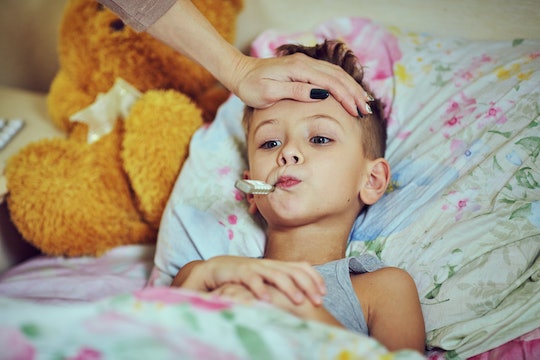 It seems like a right of passage for a kid to constantly get sick — whether from day care or school — and a runny nose is a pretty common thing to see on a child. (And unfortunately, the parents, am I right?) But how do you know when it’s worse than a common cold or allergy, and that fever your kid's sporting is something to be super concerned about? At what temperature is a fever dangerous for a child? Nobody wants to go to the hospital, but sometimes a wet rag on the forehead just isn't going to cut it. Luckily, you don't have to panic — pediatricians say it has to be pretty high before it's dangerous.

The temperature of a fever that’s most dangerous for a child is 106 degrees Fahrenheit, according to Dr. Danelle Fisher, a fellow of the American Academy of Pediatrics and chair of pediatrics at Providence Saint John’s Health Center in Santa Monica, California. She tells Romper that a fever that high is a concern for all children and you should seek medical attention as soon as possible.

For lower-temperature fevers, Fisher offers suggestions on ways to help break the fever at home. “Children can take Tylenol or Motrin/Advil. Other methods to reduce fever are to remove layers of clothing and sponge down with lukewarm water (not cold water because the child may shiver, which creates heat). Drinking cool liquids can also be helpful,” she explains. According to an Academy of Pediatrics (APA) article, if your child is over 6 months old, they may not even need to be treated for the fever — unless they’re uncomfortable and not eating, drinking, or playing like normal. Otherwise, the APA article suggested also keeping your child’s room comfortably cool, making sure they’re dressed in light clothing, they’re drinking lots of fluids, and they’re resting and not overexerting themselves during playtime.

Sometimes a fever — as long as it’s not too high — can be a good thing, according to Fisher, because a fever is a body’s way of fighting off an infection. The APA article agreed, and noted that a fever is considered a good sign your child’s immune system is working well and the body is just trying to heal itself. “While it is important to look for the cause of a fever, the main purpose for treating it is to help your child feel better if he is uncomfortable or has pain,” according to the APA article.

“What is bad is that fever makes you feel yucky (i.e., headaches, body aches, etc). It is okay to watch a child for a day or two with a fever. If a fever has gone on for more than five days or if the child looks sick (not drinking well or breathing comfortably or responsive), then the child should receive immediate medical attention,” Fisher says.

The APA article also suggested that some children don’t even show signs of having a fever and feel fine, but most will have symptoms of sweating more than usual, looking flushed, or feeling warm to the touch. “However, most will have symptoms of the illness that is causing the fever. Your child may have an earache, a sore throat, a rash, or a stomach ache. These signs can provide important clues as to the cause of the fever,” the APA article noted.

Dealing with a sick kid can be scary, especially when they have a fever. Rest assured that pediatricians believe it has to be pretty high before you should be super worried and need to seek medical attention. However, if you are concerned, it never hurts to give your pediatrician a quick call to see what they say about your particular child. Every kid and situation is different, and having peace of mind can make all the difference in the world.