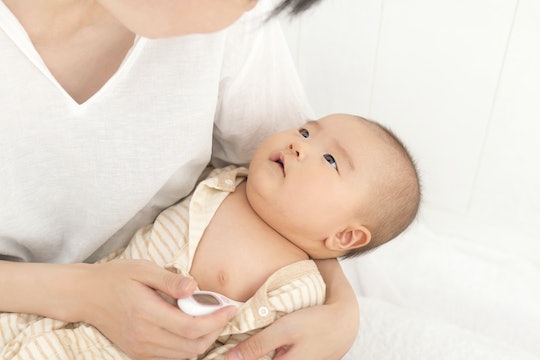 Here's When A Fever Is *Actually* Dangerous For Your Infant

Having an infant can be pretty nerve-wracking, especially for first-time parents. Until you learn each cry (and you will), every tear will break your heart and potentially make you worry something is wrong with your baby — whether they’re hungry, need a diaper change, sleepy, or the worst, sick. If your baby is acting fussy and looks a little flushed, you may be worried they have a fever. But at what temperature is a fever dangerous for an infant? Should you call the pediatrician as soon as it’s above 98 degrees? When should you be heading to the doctor?

As far as ways to try to bring your infant’s fever down at home — as long as you’ve spoken to your pediatrician already if it’s above 100.3 — Fisher suggests that "for all infants above age 2 months, acetaminophen (Tylenol) is the best way to decrease the fever. For infants above 6 months old, either acetaminophen (Tylenol) or ibuprofen (Motrin, or Advil) is a good way to reduce fever.” An American Academy of Pediatrics (APA) article also noted that while you shouldn't give your child ibuprofen if they’re younger than 6 months old, you also shouldn't give it if your infant has diarrhea, is vomiting constantly, or is dehydrated. The APA also warned against giving your infant (or child, for that matter) aspirin because it’s been linked to side effects, including “an upset stomach, intestinal bleeding and, most seriously, Reye syndrome.” The APA article suggested using a rectal suppository if your child is vomiting and that acetaminophen (Tylenol) comes in suppository form.

Additionally, before giving your child any medicine, read the label to make sure that you are giving the right dose for his age and weight. If your child is taking other medicines, you should also check the ingredients. If they include acetaminophen or ibuprofen, let your child’s doctor know. If your child is younger than 2 years, you should discuss any medications with your child's doctor to be safe, the APA article further noted.

However, as long as it isn’t a super high fever, Fisher says a fever can be a good thing. “Fever is the body's way of fighting infection and is not a bad thing. What is bad is that fever makes you feel yucky,” she explains. You can watch your infant above 2 months old for a day or two with a fever, but if the fever has gone on for more than five days or the child looks sick or has symptoms like trouble breathing or not drinking fluids well, then your child should seek medical attention immediately, according to Fisher.

The APA noted that some children don’t show any symptoms of having a fever, but many will be flushed, sweat more than usual, and feel warm to the touch. You can feel your baby’s abdomen to see if they feel abnormally warm. If you’re concerned, be sure to take their temperature with a rectal thermometer, as it’s the most accurate for infants.