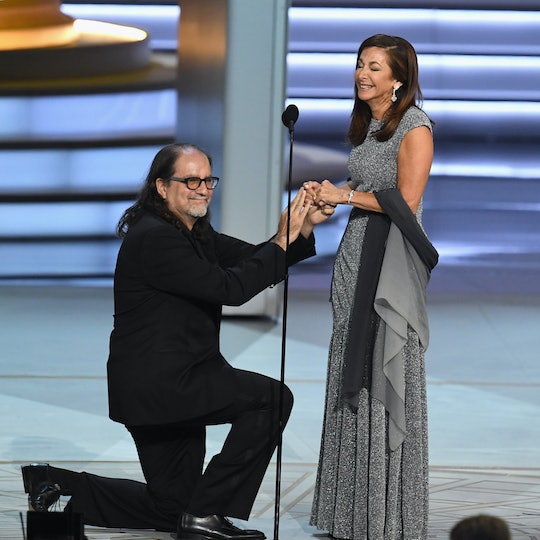 Why The Internet Is The Real Winner Of The 2018 Emmys

The only thing better than watching the Emmys from the comfort of your own home is being in the actual audience (I'm assuming), especially this year. So naturally, the audience reaction gifs from the Emmys make it seem like the best party ever. There were laughs, there were tears, there was an honest-to-goodness live television proposal. I know it's not actually what the event is about, but sometimes watching people in the audience react to the action as it unfolds is the best part of the show. Whether it's Leslie Jones leaping into the aisle in excitement, Chrissy Teigen's iconic cringe face, or Larry David's extremely on-brand disaffected reaction to losing in the Best Comedy category, I am here for it.

When Glenn Weiss won the Emmy for outstanding directing for a variety special, he used his acceptance speech to propose to his girlfriend, Jan Svendsen. The crowd went wild.Variety reported that backstage at the Emmys, the couple explained they’d worked together for about 10 years since they met in 2001. Considering their experience working on awards shows, what better place to get engaged? The proposal was the gift that kept on giving, because throughout the Emmys audience, famous actors showed their support for the impromptu display of true love. And those people really know how to emote.

Benedict Cumberbatch seemed to be especially moved by the proposal. He stood up from his seat to clap and cheer. Seems like he’s a big fan of true love.

Leslie Jones was basically a human surprise face emoji as the proposal happened on-stage. Clearly, it wasn't something that anyone had planned for or that anyone knew about beforehand, so the Emmys audience was just as shocked as viewers at home. Look at this shock and joy. Just look at it.

I don’t know if she knows the couple personally or not, but it seemed to bring Sarah Paulson to tears. (I may or may not have also been a blubbering mess on my couch, watching two strangers profess their love for each other at the Emmys.)

But before the proposal, the Emmys opening song and dance got plenty of reaction from the audience too. The song, "We Solved It," was a cheekily ironic self-congratulations on the part of Hollywood for "solving" its diversity problem. People had ~feelings~ about it.

Let’s not pretend that Chrissy Teigen's reaction to the Emmys opening monologue isn't the new official Teigen meme, though. As the hosts, Colin Jost and Michael Che cracked wise about diversity in Hollywood, Teigen tried to duck out of frame when the camera panned to husband John Legend. But she failed to get out of the shot and it was amazing. Enjoy your new "get me out of here now, please" meme, internet.

Not everyone was happy with all the awards at the Emmys (Justice for Atlanta!), but I think we can agree that the internet is the real winner here. An Emmy win lasts a moment, but a dynamite reaction meme lasts a lifetime.