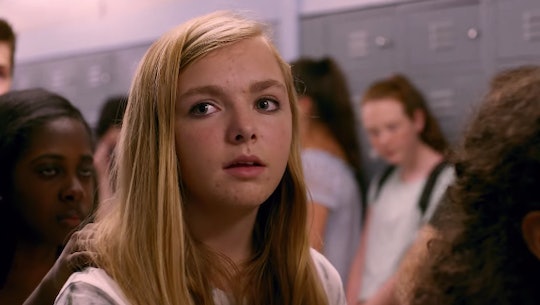 The critically acclaimed coming-of-age film Eighth Grade is getting rave reviews, but the one audience who probably should see the movie about the trials of middle school has, for the most part, not been able to do so because of the movie's rating. Eighth Grade is rated R, which means actual eighth graders have had some trouble seeing this movie in theaters. But writer and director Bo Burnham said on Twitter that that’s “sort of stupid,” so he and distributor A24 are holding free screenings so audiences of all ages can see Eighth Grade on Wednesday, August 8.

That means for at least one day, kids and teenagers who can probably really relate to the film will actually have the chance to experience it on the big screen. And parents may have the chance to have some really important discussions with their kids about the themes of the movie, which deals with everything from swearing to research on oral sex, which may be partly why Eighth Grade earned its adult rating.

Thanks to the R rating, children under 17 can only see the movie if they are accompanied by an adult. So parents could bring their kids to see Eighth Grade anytime, but it'd probably be a lot less awkward if they let their teens see the film on their own during one of these screenings, then facilitate discussion of the movie afterwards.

According to the Eighth Grade website, A24 is inviting "moviegoers of all ages" to a night of free screenings of the movie in every state on Wednesday. The R rating will not be enforced because, as the announcement put it, "if you've been through 8th grade, Eighth Grade is for you."

The timing of each screening is different depending on location, so if your kids are interested in seeing Eighth Grade, they'll have to do a little research first. Tickets are on a first come, first serve basis, so they'll want to get there early.

You'll have to use your judgment to determine whether you should attend one of these screenings with your kids, and how young is too young for a child to attend. But the truth is, if your kid is a pre-teen or teenager, this movie could be a really great one for them to experience.

Eighth Grade has a 98 percent fresh score from Rotten Tomatoes as of Tuesday afternoon, and set a new record for the best per screen average for indie movies for 2018, The Wrap reported in mid-July.

In fact, Rotten Tomatoes writer Christy Lemire wrote a whole essay about why parents should ignore the R rating for Eighth Grade and let their kids see it. "Middle school is painfully awkward no matter who you are or where you are," Lemire wrote, "and Eighth Grade captures this fraught moment in time beautifully."

Social media expedites and heightens the anxieties of this harrowing time full of insecurity, and Eighth Grade depicts that uncomfortable sensation vividly.

Because the truth is, teens and pre-teens are dealing with these issues, whether you're aware of or talking about the issues with them or not. Having screenings, even just for one night, to allow them to see this movie and relate to the characters and what they're going through is honestly pretty brilliant.

These screenings of Eighth Grade on Wednesday are a real opportunity for families across the country. They will give real life eighth graders the chance to see a movie focused on them and their experiences in theaters, potentially without their parents there, and give families the chance to encourage some discussion of the very real, serious issues middle schoolers go through every day.

The MPAA, or Motion Picture Association of America, dictates that PG-13 movies are limited to one use of the word “f*ck” per film — Eighth Grade has five, according to The Mary Sue. There are also conversations about sex, and Common Sense Media reports that "there's so much here for parents and their teens to unpack," including mean-girl behavior as well as "too much/inappropriate screen use."

But let's be real. Teens often swear. They're probably talking about sex. And they're probably using cell phones or iPads and likely have some form of social media. So why not use an opportunity like these free Eighth Grade screenings to open up discussion about those things?

Many critics say Eighth Grade is perfect for young teens. And for at least one night, they'll have the chance to see themselves represented on the big screen in this film. Parents should see that as a wonderful thing.