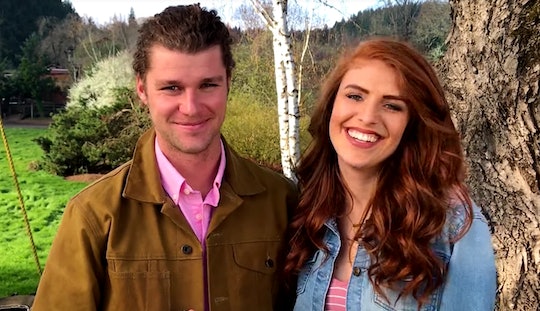 Fans of the TLC reality show, Little People, Big World had gotten used to seeing twins Jeremy and Zach Roloff fall in love with their girlfriends, get married, and have kids of their own. But fans won't be seeing both of them together on TV for much longer. Earlier this summer, Jeremy announced that he and his wife, Audrey, would be leaving the show. But the good news is, Audrey and Jeremy Roloff are starting a podcast after leaving the Roloff family reality show, so don't worry — you can still keep up with the couple.

On Monday, Audrey took to Instagram to share details with her followers about the podcast she is starting with her husband, according to Good Housekeeping. Although this might seem like an abrupt decision — to switch from reality TV stars to podcast hosts — Audrey shared that she and Jeremy had been working hard on their podcast. "This has been a longggg time coming," Audrey wrote.

In the caption of her announcement, Audrey revealed that the topics that she and Jeremy are super excited to cover in their podcast. Audrey wrote on Instagram:

We are so pumped to have some raw, unfiltered, down to earth conversations about relationships, friendships, family, entrepreneurship, running a business with your spouse, social media, fitness, marriage, faith, goal sitting, hot topic issues, being new parents, our most embarrassing moments from the week, and behind the scenes of life with us and some of our favorite people.

Audrey's statement makes it sounds like they will be covering everything under the sun on their podcast — and her fans definitely don't seem to mind. Followers of the couple took to the comments of Audrey's Instagram post to share some suggestions for their new podcast.

Their followers suggested that they talk about things like dating, adjusting to post-graduate life, and the meaning of marriage. Some people also suggested that Audrey and Jeremy interview their family members (and former Little People, Big World cast mates) Zach and Tori Roloff — as well as interviewing members of the Duggar family, according to In Touch Weekly.

Now that would make for an interesting podcast episode.

Before anyone gets too excited about this new project, it is important to note that neither Audrey nor Jeremy have announced the name of their podcast, when it will be premiering, or if they have even recorded their first episode together.

But, given how much Audrey loves updating her followers about her life, fans should stay tuned to her Instagram account where she will definitely be posting more updates about the podcast there.

While this podcast is exciting, you can add it to the long list of things that are keeping Audrey and Jeremy very busy now that they are no longer appearing on Little People, Big World, which they announced on July 10, according to People. Together, the couple runs a marriage ministry, called Beating 50, which promotes covenant marriages, according to Good Housekeeping. They've also written a book together titled A Love Letter Life: Pursue Creatively, Date Intentionally, Love Faithfully, which is due out in April 2019, according to People. Meanwhile, Audrey runs her own internet store called "Always More" and sells essential oils.

It's amazing that both she and Jeremy are capable of doing all of this while being parents to their soon-to-be 1-year-old daughter, Ember Jean. And now they can officially add "podcast hosts" to their respective resumes.