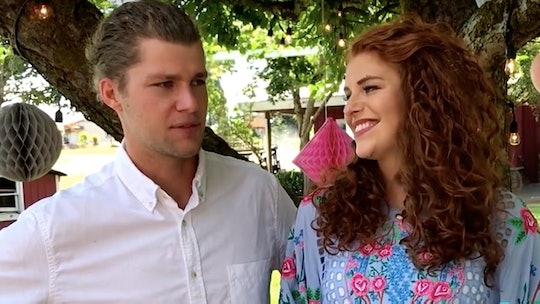 Jeremy and Audrey Roloff of TLC's Little People, Big World are new parents. The couple welcomed a baby girl on Sept. 10, and they're now adjusting to life with their new daughter. It's always a mixed bag of tricks when a baby comes home, perhaps especially so the first time around. While the reality stars are obviously new to the adventure of bringing a baby into the world, they've made it pretty clear they feel up to the task. In fact, Audrey and Jeremy Roloff revealed how they plan to parent their first baby, and they're all about trusting their own instincts.

The couple welcomed Ember Jean Roloff 11 days after her original due date, weighing 7.13 pounds. The story behind her name is pretty adorable; the couple told Us Weekly that Ember represented their activity of choice on date night; "campfires have been such a big part of our love story.” Just two weeks after Ember joined the Roloff clan, the couple was camera-ready and anxious to show off their little girl at their new home in Portland, Oregon. In the early days of parenting, the couple found their newest addition simply a marvel to behold, according to an interview with Us Weekly:

Right now, she mostly sleeps and feeds you know, so getting to watch her and see how she physically evolves, and also just all her little mannerisms and character traits will be really fun.

Now that a few more weeks have gone by, Jeremy and Audrey are starting to look at their long term plans for how to parent little Ember. Audrey seems to be taking things in stride, telling Us Weekly that for the moment she's happy to simply work on:

Just balancing life while being a mom, like work and marriage and other family members and friendships and all of that, just trying to find a rhythm.

Jeremy, on the other hand, is already worried about how he will discipline his daughter when the time comes. In fact, he's so worried it's apparently keeping him up at night.

Fortunately, I think he probably has a little while to think on it.

As it is with all couples, these two are trying to come to figure out a balance. Jeremy and Audrey, who got married in September 2014, were raised in different households with different parenting ideologies. Not to mention the constant advice that every parent has thrown at them, unprompted. Audrey explained to Us Weekly:

Ultimately, like, everyone is gonna tell you all these different things to do and try. There are so many different ways to parent and raise a baby and all that, but ultimately just kind of trusting your gut I guess and doing what you think is best.

If they're looking for advice on parenting, they don't have to look far; Jeremy's twin brother Zach and his wife Tori Roloff welcomed baby Jackson in May. Jackson was born with achrondroplasia (also known as dwarfism) like his father, and Zach had some parenting wisdom to share with People:

It seems Jeremy has a similar, no-nonsense approach to parenting. As nervous as he might be about disciplining his daughter some day, he told Us Weekly that they're "ready for this journey."

He continued, "But are we prepared? No. I don't think you can be prepared. Similarly to marriage, you just do it and it happens and then you kind of catch up to it."

Audrey and Jeremy might not be prepared, per se — honestly, is any new parent? — but they certainly seem ready to take on the challenge.