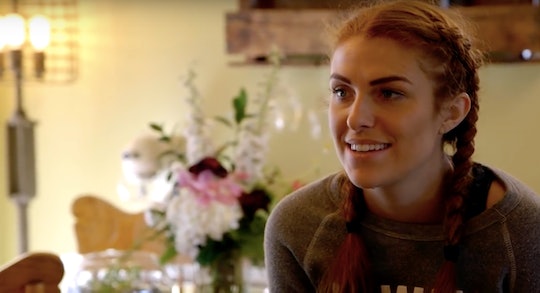 Audrey Roloff Isn’t Sugarcoating How Painful Breastfeeding Is For Her

Little People, Big World fans were thrilled earlier this month when two stars of the reality TV show, Audrey and Jeremy Roloff, had a beautiful baby girl. Audrey was open with fans on social media throughout her pregnancy and she's not stopping now, even if not everything about being the mother of a newborn has been all sunshine and rainbows. In a new Instagram post, Audrey Roloff isn't sugarcoating how painful breastfeeding has been for her, and the way that other mothers have responded is amazing.

Audrey posted a picture on Sunday of her and Jeremy holding tiny, 2-week-old baby Ember Jean Roloff, who was born on Sept. 10. In the accompanying caption, Audrey wrote all about her love and joy at being a new mom, but she also got incredibly honest about breastfeeding. She wrote:

While I am overflowing with love for my daughter and husband, I won't sugar coat it... these past two weeks have been HARD. The first 24 hours with Ember were bliss, but after that it was as if I went back into labor again... I was well prepared for the pain and suffering that comes with childbirth, but I was not prepared for the pain and suffering that comes afterwards. I got all the things... the common "TMI" postpartum hurts, along with severe engorgement, too much milk, not enough milk, blisters, bruises, clogged ducts, and mastitis. I can't believe I'm saying this, but the pain that I've experienced while breast feeding has been comparable to unmedicated labor contractions.

Sure, everyone knows that the early days of a baby's life are hard for the parents, who are in a constant state of sleep deprivation and bewilderment. But all too often, parents don't really talk about the specifics of the challenges they're facing, even as a chorus of people judge them for their choices.

But for others, it can be a lot more frustrating or complicated than that. And for women like Audrey, it can be like "unmedicated labor contractions," she described in her Instagram post, all over again.

The stress and the disappointment from her breastfeeding difficulties have definitely affected Audrey. She wrote in the same post:

Inevitably, all of this has left me feeling like I am failing my baby, frustrated, discouraged, and heart ached. But even though the tearful sleepless nights persist, so will I. I will continue to pour myself out in sacrificial love for this baby girl who makes every hurt worth enduring.

The internet can be a terrible, troll-filled place. But in response to Audrey's honesty about her struggles, her comments section filled up with women who have, quite literally, felt her pain. They responded in solidarity, with advice and encouragement, and with a reminder that ultimately, it's okay for her to take care of herself, too. They shared their own stories of struggling to breastfeed, of reality butting up against their expectations in the most painful way. Some women in the comments section managed to push through the initial pain and make it work for them, while others eventually decided to switch to bottle-feeding and had it work out wonderfully.

"Don't ever feel worthless! Truly, you are doing what is best for baby and now you have to do things for yourself so as not to get distraught!" one commenter wrote. "I had to supplement formula when I was breastfeeding because my little guy wasn't thriving! I felt so bad! Now that little guy is a 16 year old football player! Try not to stress! Yes it seems impossible but it's NOT!"

Kudos to Audrey for being open about a difficult subject, and helping to reduce the shame. And here's hoping that things get easier from here on out, whether she decides to continue breastfeeding or not. After all, every mother has to choose what's best for her and her baby.