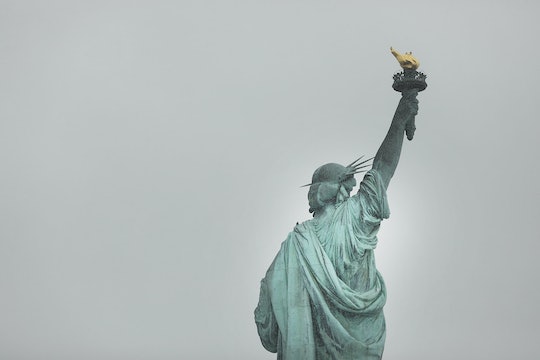 President Trump's recent decision to suspend the United States refugee system for a handful of Muslim-majority countries has landed him in a heap of hot water in recent days. Thousands of Americans have been protesting his latest move (actually, people have been protesting almost non-stop ever since he was elected), and the acting attorney general was recently fired for questioning his that same immigration order, so it's safe to say things aren't exactly going as planned for the new administration. Perhaps in an effort to appease his detractors, White House Press Secretary Sean Spicer announced this week that Australian refugees will be allowed in the country — but before you do cartwheels and marvel at how forward-thinking the Trump administration is becoming, you should be aware of a few important caveats.

As Sean Spicer pointed out during a press briefing on Tuesday, 1,250 refugees being detained in Papau, New Guinea will be allowed in the country once they have been "vetted:"

It was President Obama who initially announced the decision to bring refugees currently on Nauru and Manus Island to the United States, in exchange for the Australian government taking on refugees from Central America. At the time, no specific numbers were shared, and no time frame for resettlement was given.

In light of President Trump's recent decision to temporarily ban entry to the United States for citizens of seven Muslim-majority countries (Iran, Iraq, Libya, Somalia, Sudan, Syria and Yemen) for the next 90 days (and in Syria's case, perhaps indefinitely), there was some concern that his administration would not follow through with Obama's deal — particularly considering that many of the refugees in question, mostly from Manus Island, are from Iran. There are also a significant number of refugees from Iraq, Sudan, and Somalia.

Which brings us to the next asterisk on the refugee announcement: What exactly is "extreme vetting?" Spicer didn't say, although new Secretary of Homeland Security John Kelly has said it could include looking into a potential immigrant's social media accounts and web history, according to Huffington Post Australia:

It might be certainly an accounting of what websites they visit. It might be telephone contact information so that we can see who they're talking to, but, again, all of this is under development. Those are the kind of things we're looking at. Social media. We have to be convinced that people that come here, there's a reasonable expectation that we don't know who they are and what they're coming here for and what their backgrounds are.

The resettlement process is expected to take between six to 12 months, and no details regarding possible locations have been released.

In other words, while Trump and his administration may appear to be opening up in terms of immigration, in reality, they're really just stuck carrying out an accomplishment from the previous administration — just in their own way.