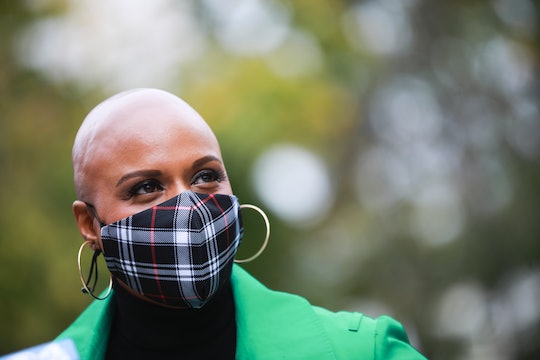 Voting doesn't have to be boring and dull. As a matter of fact, you can (and should) dance your way to the polls. Like Rep. Ayanna Pressley, who danced for voters waiting in line and helped bring a little #JoyToThePolls this morning.

The Massachusetts congresswoman was captured on video Tuesday morning doing "The Wobble" dance with voters outside a polling station in Boston. "Yes, I was in fact doing the wobble," Pressley later tweeted after the video went viral. "... I love that people are joyful in casting their ballots & making their voices heard. We met elders & first time voters, families voting together. Great start to #ElectionDay."

The video of Pressley doing "The Wobble," initially shared by Beata Coloyan on Twitter, has been seen over a million times and, needless to say, people are loving the good vibes it's sending on an undoubtedly stressful day. "Love it! Wobble, baby, wobble! Let’s all show some love while we create the Blue Tsunami," one person tweeted." Another commented, "Voting should be a fun celebration that everyone is entitled to!! This is how we want our elected officials to be — professional in the chamber — fun in the streets."

Another admirer commended Pressley for braving the New England cold to do a two-step. "GURL!!! You betta get it to," they tweeted. "In them heels in that Boston cold...YASSSSSS BABY YASSSSS!!!!" Another woman cosigned, "And in heels Mama!!!! You go."

Beyond Pressley, people all across the country are bringing their own joy to the polls on Election Day. In Philadelphia, for example, a #JoyToThePolls truck stopped by a polling spot to keep voters energized.

Also in Philadelphia, a 90-year-old woman literally danced her way to the polls Tuesday morning in a video that's been seen over 159,000 times. "That's strong right there," a person on a mic in the background of the video can be heard saying.

#JoyToThePolls is not only a trending topic on Twitter, it's an actual campaign. The nonpartisan movement to bring joy and celebration to voting has also partnered with a slew of celebrities like America Ferrera and Lin Manual Miranda who've created Election Day playlists you can listen to on Spotify. Or follow Rep. Pressley's lead and dance a little today.